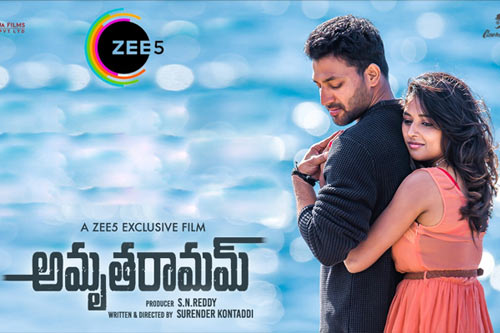 So, continuing the series of reviewing movies and shows during the lockdown period, our today’s pick is Amrutharamam, the first Telugu film that has skipped the theatrical release and has come out directly on the OTT platform Zee 5. Let’s see how it is.

Amrutha(Amitha Ranganath) lands in Australia for her higher studies. The moment she sees Ram(Ram Mittakanti) it is love at first sight for her. After a while, even Ram falls for Amrutha, and the couple enters a live-in relationship. But the possessive attitude of Amrutha does not go well with Ram. He keeps getting irritated and leaves Amrutha after one particular big fight. The rest of the story is about how Amrutha wins her love back.

The character of Amrutha is established nicely in the film and Amitha Ranganath does well in it. She is pretty good as an obsessive lover and is effective in the emotional and climax of the film. Hero Ram does well as a frustrated lover. The dialogues of the film are quite meaningful and especially those written for the heroine. Production values of the film are just about okay but the music is pretty impressive by N S Prasu as his BGM and score is good. The last twist that comes during the climax is also effective.

The film has a very routine story and concept-wise nothing new has been showcased. There are plenty of silly scenes in the film which have been thrown in at regular intervals and especially the hero’s boss wooing him looks bad. Apart from the lead pair, the rest of the cast looks out of place and do not bring depth to the film.

Overall, Amrutharamam is the same old love story of an obsessed girl in love and has nothing new to showcase. The heroine, Amitha gets full marks for her performance and the narration is not so bad but it is also not that exciting except for the last fifteen minutes. So, this is not the kind of film that you would watch on a normal Friday. But since it is the lockdown, give it a shot but go in well prepared for what’s thrown at you.