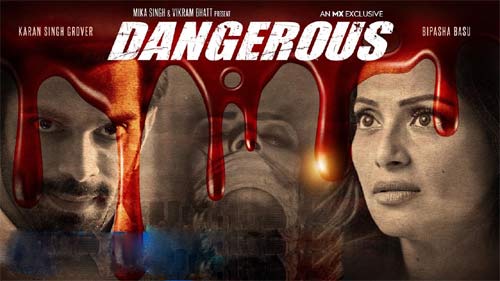 So, continuing the series of reviewing movies and shows during the lockdown period, our today’s pick is the Hindi web series Dangerous starring Bipasha Basu and her husband Karan Grover. The series is available on MX PLayer nd let’s see how it is.

Aditya Dhanraj(Karan Singh Grover) is a rich businessman in the UK. One fine day, he calls the cops to report the missing case of his wife Dia Dhanraj(Sonali Raut). The case is assigned to Neha(Bipasha Basu) who shares a past with Aditya. Why is Aditya’s wife missing? How does Neha help in solving the case? and who is the actual culprit between the three key characters?

Firstly, it is good to see Bipasha Basu after a long time on screen. She looks glamorous enough and carries her role quite well. Bipasha shares crackling chemistry with Karan Grover in the series. Sonali Raut is neat as the frustrated wife. The series has good production values and the songs sung by Mika also set nicely in the narrative.

The twists and turns that are shown are decent in the initial episodes. Though the plot is a bit predictable in the latter episodes, the way it has been narrated with decent thrills looks nice. The suspense-filled episodes have been designed well and the crisp runtime makes things very easy for the audience. The editing is pretty good as not many extra scenes are added just to drag the story.

The story is neat but is not clear from the angle of hero Karan Singh Grover. His motive and why he has so many issues with his wife and how broke up with Bipasha Basu, all these lack logic.

On the whole, Dangerous is a web series that has a decent story and suspense. Bipasha Basu leads from the front and makes things interesting with her performance. If you ignore the dull ending and a few logics here and there, this series ends as a passable watch during this lockdown. Give it a shot if you have nothing else to do.