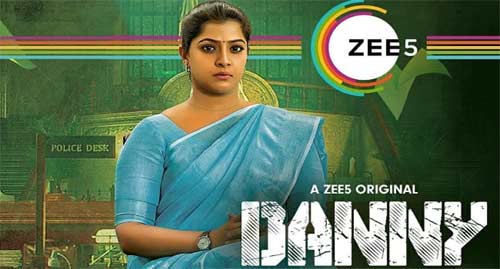 So, continuing the series of reviewing movies and shows during the lockdown period, our today’s pick is the Tamil film, Danny. The film is available on Zee 5 and let’s see how it is.

Danny is a patrol dog that helps the cops in their investigation. The film is set in the city of Tanjavur, Tamil Nadu where a same kind of crime is being done against women in particular. In comes inspector Kuntavi(Varalakshmi Sarathkumar) who is assigned this case. The more she thinks the case is simple, it keeps getting complex. The rest of the story is s to how Kuntvai solves the case along with Danny.

The crime angle and the way the entire plot is established in a local town look good. Anitha Sampath has played a crucial role in the movie and she has done a neat job. The look and field of the film and the scenario of the cops handling the case is neat. The BGM and production values are top-notch. Vela Ramamoorthy was good in his role.

The supporting cast is a bit disappointing in the film. As the film is made on a low budget, the supporting cast is below par and ham to no extent. There is no depth in this film in the second half where all the drama happens. The film’s duration is only 95 minutes but the director does not pack enough suspense or handles the screenplay and makes it engaging.

The title of the film is not justified as it is mostly Varalakshmi who is doing all the investigation. The first half an hour looks solid but from there, things fall like a pack of cards as so many predictable scenes come one after the other and spoil the mood of the audience. The suspense is not at all tight as many scenes create no impact.

Overall, Danny is a crime drama that has a fabulous performance by Varalakshmi Sarathkumar. The first half an hour is solid but from there on, the film falls on its face and the screenplay goes for a toss. The scenes become predictable and the suspense is also dull making it a disappointing watch during this lockdown.