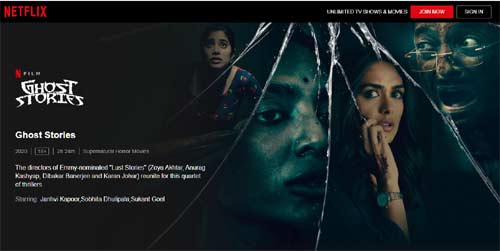 So, continuing the series of reviewing movies and shows during the lockdown period, our today’s pick is the original web-series Ghost Stories. Directed by four different filmmakers like Anurag Kashyap, Dibakar Banerjee, Zoya Akhtar, and Karan Johar, this series is available on Netflix.

The web series is an anthology about four different stories related to horror. All of these stories have some noted stars like Janhvi Kapoor, Shobita Dhulipala, Mrunal Thakur, and Sukant Goel. Each of the stories is filled with suspense elements with a mysterious and horror backdrop and how the central character thinks about the different scenarios in her/his mind.

The setup of each of these stories is solid and the production values are top-notch. Janhvi Kapoor is top-notch in her role as a nurse and looks realistic in her character. The way she emotes is also good. Shobitha Dhulipala is the best of the lot in the whole series with her gripping performance as the one who loses sight of what is real and what is her nightmare. The build-up to all the conflict points in these stories is different and started off well.

In Zoya Akhtar’s story, the story is predictable. Janhvi does well, but she doesn’t wow us during the latter part of the episode where her role becomes weak. In Anurag Kashyap’s story, the horror is neither here nor there and it is pretty underwhelming even though Shobitha tries hard to pull it off.

In Dibakar Banerjee’s story, he plays with psychological fear and presents an absurd story that hits you only if you buy it. Many won’t. Finally, in Karan Johar’s story, it is quite posh but looks extremely childish. You know what is to happen right at the end of the first scene and that is how much this story of Karan tends to be predictable.

Overall, Ghost Stories has some of the biggest names in the industry trying a hand at horror with the best of the star cast in their respective stories. But these stories have no-sheen, look silly and over the top. Watch it only if you like horror stuff but there is nothing worth enjoying.