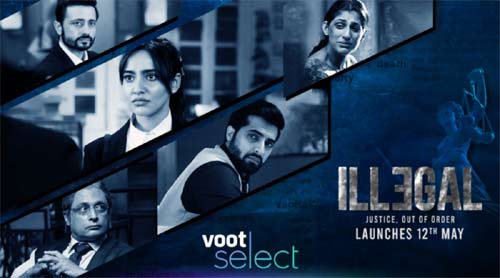 So, continuing the series of reviewing movies and shows during the lockdown period, our today’s pick is the new Hindi web series Illegal on Voot. Let’s now see how it is.

Janardhan Jaitley(Piyush Mishra) is a top lawyer and runs one of the biggest law firms in Delhi. One fine day, he hires Niharika Singh(Neha Sharma), a confident young lawyer to fight the case of Kubra Sait, who is facing death punishment. If this was not enough, he also forces Niharika to take up a case that deals with sexual harassment at an office. But in all this there’s a catch and that Niharika has to solve and fight both the cases not knowing the enemy. How will she do it is the crux of this web series.

Neha Sharma takes a U-turn from her regular glamor roles and is superb as a good-hearted lawyer. She performs the best in all the courtroom scenes and when she confronts Kubra Sait. Neha has pulled off the central role with a lot of ease. Kubra Sait is the best part as she delivers a very emotional performance in her role.

Senior actor, Piyush Mishra in a negative role is supreme and is the main attraction of the show. The various twists and turns that come in the cases have nicely been unleashed. The Mee Too angle has nicely been covered in this series. The last few episodes are quite thrilling. The setup, BGM, and production values are top-notch.

The web series starts off on a dull note as the characters are introduced in a clumsy manner which is a bit confusing. The main drawback is that the series could have been wrapped up in just 5 to 6 episodes but is dragged just for the sake of it to 10. The writing is a bit weak in certain areas as some logics related to both the cases go missing. Things happen so easily for the main lead which looks a bit odd as well.

Overall, Illegal is a decent courtroom drama, that has a good setup and solid performances from Neha Sharma and Piyush Mishra. The twists and turns keep you hooked but the middle parts of the series are dragged for no reason. If you are the one who likes such crime thrillers, give this web series a shot but be prepared for a slow pace.