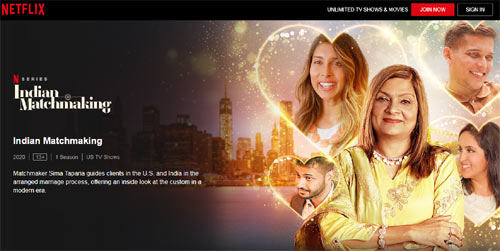 So, continuing the series of reviewing movies and shows during the lockdown period, our today’s pick is the much talked about reality show Indian matchmaking. The show is available on Netflix and let’s see how it is.

Indian matchmaking is a reality show where a Mumbai based matchmaker, Sima Taparia sets up matches in India and abroad. Sima travels back and forth to the US and Mumbai and personally visits the participants and finds suitable matches after listening to their choice. The show has eligible bachelors in the form of two Mumbai boys(Akshay and Pryadhyuman) and 5 Indian Americans(Vysar, Aparna, Ankita, Nadia, and Jay) who want to find their partners through an arranged marriage. The whole show is about how Sima sets up meetings for the participants and their families and how many of them end up marrying successfully at the end of the show.

Though a major section of today’s generation does not approve of arranged marriage, this has been our Indian culture from ages. This shows showcases that aspect in a very interesting manner. The way in which the matchmaker meets the participants and sets up matches for them is executed well. The show has been made in such a way that it caters to the mentalities of various sections of the Indian societies living across the world.

Out of all the participants, the best and most entertaining part is Akshay, a young businessman from Mumbai who is a complete mama’s boy. The way his match is set and how his mother pressurizes him to get married is showcased in a very interesting manner. Apart from this, the way Sima tries hard to fix a match for Aparna, an attorney in Houston is quite good. Aparna is a very strong-headed girl and Sima finds it very hard to find her a match.

The series has been scripted cleverly and covers all the aspects. The participants are picked interestingly as one of them is commitment-phobic and the other is a divorcee. Then, there is one guy called Vysar who is from a traditional yet modern Indian American family in Austin. Every participant that Sima chooses has a background and own issues. The way such people are suggested matches looks quite engaging.

The show is based on the topic of arrange marriage and this itself can be put off for many. The way some parents force their kids to get married looks a bit fake. The dominance of Akshay’s mother who wants everything to happen according to her choice looks a bit staged.

The series covers topics like racism and not marrying divorcees which may not go well with many. Also, the show looks a bit staged as some episodes are added just to create more drama. Some girls might feel the show as cringe-worthy as a few women in the show are showcased as objects who are forced to change their ideologies and lifestyle just because they are getting married.

Overall, Indian Matchmaking is a reality show that deals with the concept of arrange marriage. The way a matchmaker sets up matches for worthy candidates in India and abroad on-camera looks quite engaging. The show will have mixed reactions as it covers delicate topics, touches various sensibilities of different individuals, and looks a bit staged here and there. If kept all this aside and watched just as a show, Indian matchmaking ends up as quite an interesting watch. Go for it.