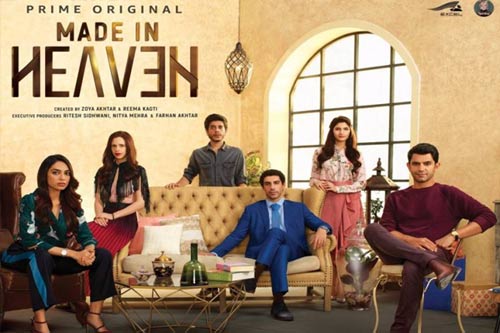 So, continuing the series of reviewing movies and shows during the lockdown period, our today’s pick is the first season of Hindi web series Made in Heaven. Created by Zoya Akhtar and Reema Katgi, this web series is available on Amazon Prime. (You can watch in English as well)

The web series is all about the lives of Tara Khanna(Shobitha Dhulipala) and Arjun Mathur(Karan Mehra) who run a wedding planning agency called Made in Heaven. While Arjun is gay and has his own problems with society, Tara is married to a rich businessman Adil Khanna(Jim Sarbh), and has her own share of insecurities. In each episode of the web series, a grand Indian wedding is showcased with some problem or the other. How do Tara and Adil solve these wedding issues amidst their own problems in the rest of the story?

This web series has some of the best performances in recent times. Shobhita Dhulipala is a revelation as Tara Khanna. The way she brings out those deep dark emotions is terrific. Karan Mehra does his gay character supremely well. The lavish Delhi culture and what happens in these so-called big fat Indian weddings have been showcased supremely well.

Jim Sarbh is superb as Shobhita’s husband. The twists and turns in each episode and a harsh truth behind every character is so well thought of and will shock you completely. The production values, camera work is stunning.

Overall, Made in Heaven is a terrific web series that is dark, bold, emotional, and filled with twists and surprises. It has some of the boldest lovemaking scenes for a web series and is only for adult viewing. Barring that, all those who missed this web series during its release should not miss Made in Heaven for its terrific performances and drama.