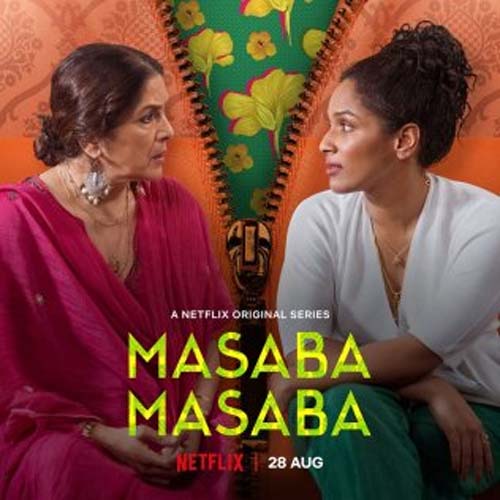 So, continuing the series of reviewing movies and shows during the lockdown period, our today’s pick is the Hindi series Masaba Masaba based on the life of designer Masaba Gupta. The Hinglish series is available on Netflix and let’s see how it is.

The series is based on the chaotic life of designer Masaba Gupta who herself plays the role. She is a top designer in Bollywood and is going through a divorce and issues with her fashion brand. On the other hand, her mother Neegupta is making big strides at the age of 60 and is trying to prove herself. The series is a fictional tale about the struggles of the mother and daughter who play real-life characters. It has six episodes.

Firstly, Designer Masaba Gupta makes her acting debut and she is surprisingly good in her role. Be it her uncanny looks, or the way she acts in all the posh romantic scenes is pretty good. Masaba also carried emotions well and should try her hand act acting more in the days to come.

Neil Bhoopalam is amazing as the business tycoon and suits the set up well. The show gets a good depth with Neena Gupta’s role. Her comic timing, chemistry with her daughter, everything is so well done by Neena Gupta. The setup, production values are supreme and remind us of Hollywood shows at once.

More than anything the manner in which the director has showcased the link between real and fictional moments is amazing. The runtime is also sweet and does not get on to your nerves.

Firstly, this is an upmarket and hi-society show which is not for the regular audience as it does not have a concrete story or rooted characters. It shows how people like in the fake It is more about the lives of two people who people real-life characters in fictional situations and this might look odd for many. Also, the season is one is ended on a simple note without much suspense or drama. The supporting cast does well but their roles are not that great.

On the whole, Masaba Masaba is a posh up-market fictional web series based on the real-life characters of designer Masaba Gupta and her actress mom Neena Gupta. The show has great production values, fine performances and gives you a glimpse into the lives of the rich and famous in Bollywood. Though it does not have a great story, the unique setup and Masaba Gupta’s life in up close and personal makes this show an interesting watch.