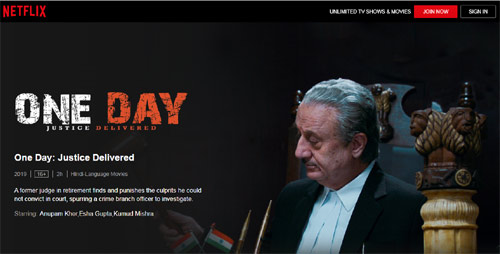 So, continuing the series of reviewing movies and shows during the lockdown period, our today’s pick is the crime thriller One Day Justice Delivered directed by Ashok Nanda. The film is available on Netflix.

Judge Tyagi(Anupam Kher) retires from his post and starts living a peaceful life. But behind this normal life, he runs a parallel court where he kidnaps those committed big crimes and wet let free by the court due to the lack of evidence. A number of big shots go missing and this crazy case is assigned to ACP Lasmi Rathi(Eesha Gupta). The rest of the story is as to how she nabs Judge Tyagi in his act.

The concept of the film is pretty good and has been nicely written. The proceedings start on a very interesting note and the first two kidnappings have been shot well. Anupam Kher is superb as the retired judge who commits all the crimes. The crime angle showcased in the film is good. Eesha Rebba is neat as the cop and so is the supporting cast. The second half has decent thrills and an emotional ending.

After starting the film on a very interesting note, the proceedings become quite slow and dull. The interval part is also not that impressive. One has to wait until the last half an hour to understand what is actually happening in the film. Eesha Gupta Haryanvi accent is horrible and is a big turn off for the audience. Many logics go for a toss in the way the murders are showcased.

Overall, One Day Justice Delivered is a crime thriller that has a very good plot but is marred by sloppy narration. Anupam Kher is top-notch with his performance and the film has some impressive kidnapping scenes. Apart from that, the film becomes slow and over the top in most parts making it a below-average watch during this lockdown.