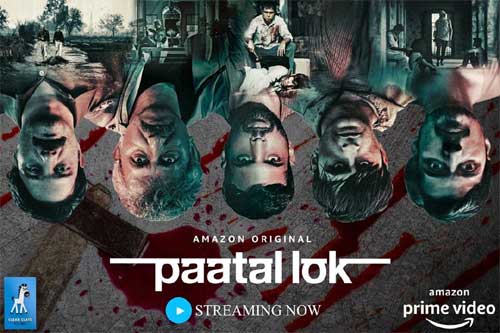 So, continuing the series of reviewing movies and shows during the lockdown period, our today’s pick is the latest Hindi web series Paatal Lok. Produced by star heroine Anushka Sharma, this series is available on Amazon Prime.

In the heat of Delhi traffic, four criminals get caught red-handed fleeing the city. The news comes in that this group landed in the city to kill a famous TV journalist Sanjeev Mehra(Neeraj Kabi). The Delhi police select inspector Hati Ram Choudary(Jaideep Ahlawat) to crack this case. But as the web series progresses, Hati Ram comes to know that some of the biggest heads in the country are involved in this case. How does he crack the case forms the rest of the story?

Paatal Lok has a solid script and that is the main strength of the web series. The manner in which the story unfolds with each episode is riveting and has been executed in the best way possible. The back story of each of the criminals is shown in a gruesome manner. The detailing that has gone into the writing is on another level as every nitty-gritty of logic and how the whole media and political game played is shown in a terrific manner.

Jaideep Ahlawat gives his career-best performance. His slang as the Delhi police and how he fights alone to crack the case, the actor has showcased it in a solid manner. Abhishek Banerjee as Haotda Tyagi was brutal in his role. Gul Panag did her house wife’s role well. The caste-based politics in UP have been showcased well. Ishwak Singh as Ansari is also amazing in the series.

The web series has the best production values and looks so realistic. The BGM, camerawork, and props used are so real and effective. The series has 10 episodes and every episode is filled with crime and suspense which keeps you hooked till the end.

The story is simple but the way it is unraveled is a bit complex. If you miss a few scenes or an episode it is very hard to understand what is going on in the story. Things should have been simplified a bit for the common man to understand the proceedings a bit more easily. There is too much gore and is surely not for family audience.

Overall, Paatal Lok is one of the best web series that has come out in recent times. The writing, setup, performances, and execution is top-notch. All those who have an eye for investigative thrillers will just love this series. Barring the slightly complex narration in a few episodes, Paatal Lok is a must-watch during this lockdown. Don’t Miss it.