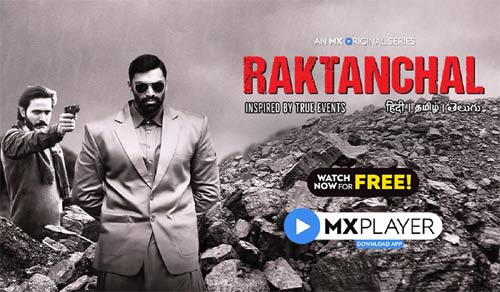 So, continuing the series of reviewing movies and shows during the lockdown period, our today’s pick is the latest web series called Raktanchal on MX Player. Let’s see how it is

The web series is set in the early ’80s in the Purvanchal area of East Uttar Pradesh. Waseem Khan(Nikitin Dheer) is the undisputed don who creates havoc with his power. He dominates senior officials and grabs all the government tenders. In such a stage, competition arises in the form of Vijay Singh(Kranthi Prakash Jha). Vijay steals a big tender from Waseem Khan here by starting a big gang war in that area. The rest of the story is as to how both these guys fight for ultimate supremacy.

After a long time, Nikitan Dheer gets a good role and is perfect in it. He uses his towering personality and makes sure that it causes enough effect with his dialogues and screen presence. Kranthi Prakash Jha is a talent to watch out for and does a solid job in his role. The whole rustic effect of UP and how local dons deal with crimes is showcased well in this series.

The battle for power between the two key characters has been set up well and is also executed wonderfully in most of the episodes. The way all the characters are established in the initial two episodes is also cool. As in all UP backdrop shows and films, dialogues are superb and the same is the case with this series too. The solid camera work and thumping dialogues give this series an edge over others.

The climax or the so-called ending of the series is a big disappointment. Many will think after so much of happening between the two main characters, one would expect a big end and a solid confrontation but that is not the case. The writing in the middle episodes is quite dull with basic emotions not creating any effect. The violence angle should have also decreased a bit to make things simple.

Overall, Rakthanchal is a rustic series that has a solid premise and nicely set characters. The narration, making, and dialogues keep you interested in the show most of the time. Barring the last episode, this series sends up as a decent watch for all those who like dark and gritty rural crime dramas which have become a fashion these days.