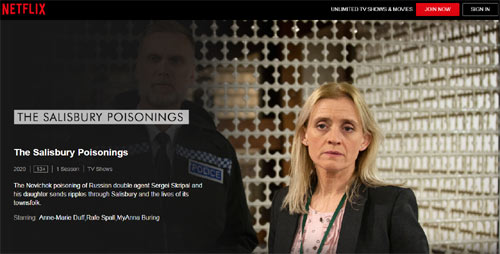 Our pick today in the lockdown review series is the phenomenal BBC crime-drama, The Salisbury Poisonings, which is currently streaming on Netflix. The four-episode limited drama series is based on true events which happened in the city of Salisbury in the UK, back in 2018.

What’s the story about?

In March, 2018, two ex-Russian spies, Sergei and Yulia Skripal were poisoned in broad daylight in the city of Salisbury, UK. The incident became an international scandal with the UK government accusing Russia of terrorist activity on its soil. However, there’s a bigger problem that the city has to face. Tracy Daszkiewicz, the director of public health, and another scientist find out that nerve agent, a deadly chemical, was used to poison the two people. It’s so deadly that even a small teaspoon of the chemical can potentially kill thousands of people. Tracy and the local police officials seek the help of the army, chemical experts to decontaminate the whole area and save people’s lives. But the task is more complicated than it seems. The rest of the story is about the long and harrowing times which Tracy and several other people have had to go through for the safety of the people.

HBO’s Chernobyl is among the finest TV series ever made and although it had a different story to tell, the series also turned the spotlight on scientists following due process to save countless lives. On a similar note, The Salisbury Poisonings focuses on the role of the public health officials in the society and the decisions they take to save people’s lives. Although the whole incident in Salisbury sparked an international scandal, the series, however, is an investigative piece about what happened in the city after the two ex-spies were poisoned. Right from the word go, there’s tension in the air and when the health officials understand the severity of the issue at hand, it becomes a test of their courage. Considering that the whole world is under some sort of lockdown due to Covid-19, the context in which The Salisbury Poisonings unfolds might be different, but it feels even more terrifying. The writing is top notch, and the casting is perfect. Anne-Marie Duff is perfect as Tracy, the health official, whose efforts managed to save a lot of lives. Then, there’s Rafe Spall as Nick Bailey, a police officer, who also gets poisoned and fights for his life. While Tracy symbolizes how the health officials scrambled to save lives, Nick Bailey’s journey throws light on how the incident took a massive toll on individuals and their families. However, the most tragic of the lot is the story of Dawn Sturgess, played by MyAnna Buring, who wants to mend her ways and become a better person; but she loses her life in the process. Ultimately, the series is also about leadership and having to live with guilt when something goes horribly wrong.

The original series which was aired on BBC was divided in three-parts; however, the Netflix version is a re-edited version with four parts. With each episode being around 45 minutes long, it’s packed with plenty of drama and tension, and it’s perfect to binge-watch at a stretch. It’s a remarkable investigative drama, from a writing perspective, as it stitches together different sets of events to give the audience a sense of the horrible times that the residents of Salisbury had to go through.