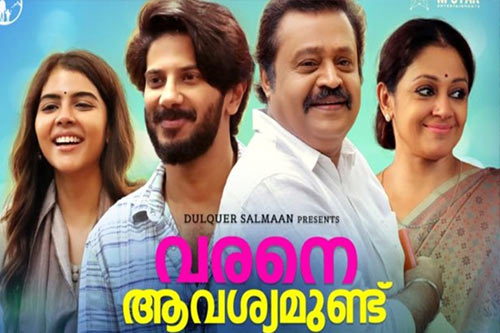 So, continuing the series of reviewing movies and shows during the lockdown period, our today’s pick is the 2020 Malayalam film Varane Avashyamund produced by star Malayalam hero Dulquer Salman. The film directed by Anoop Satyan is available on Netflix and Sun NXT.

Neena(Shobana) is a single mother who lives in an apartment complex in Chennai along with her independent daughter Nikki(Kalyani Priyadarshan). While Shobana starts teaching classic dance, Nikki is desperately in search of a groom through a matrimonial site. Their lives change when a retired major(Suresh Gopi) and a handsome young man Bibeesh come and start living in the same apartment. As time passes by, both the mother and daughter find their own matches in the form of major and Bibeesh. How all of this is done is the whole story.

It was so good to see Shobana after a long time in a movie. She is the biggest plus of the film and does exceptionally well as the mature woman who falls in love with an elderly man. She plays the role with such dignity and poise. All her scenes with Suresh Gopi are quite endearing. Dulquer Salman plays the waiting game and allows his character to settle down along with the script of the film. Kalyani Priyadarshan is also impressive as the modern girl. The characters have established in a superb manner. The romance showcased, bonding between the characters look quite natural.

The film is devoid of commercial aspects and takes its own time to grow. The first half an hour of the film is quite slow as characters are only introduced during this time. There are not many conflict points in the film and it is like the coming of age for different characters.

Overall, Varane Avashyamund is a well made romantic family drama that has some really endearing performances. The ensemble cast of Shobana, Duquer, Suresh Gopi, and Kalyani Priyadarshan makes things even interesting for the audience. Barring the slow pace, this movie ends as a decent watch during this lockdown. Give it a shot.