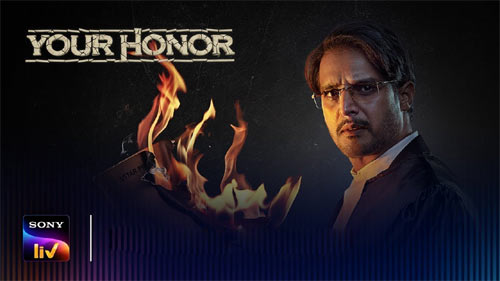 So, continuing the series of reviewing movies and shows during the lockdown period, our today’s pick is the Hindi web series, Your Honor. The series is available on Sony Liv and now let’s see how it is.

The series is set in Ludhiyana and is about a sincere judge named Bishan Khosla(Jimmy Shergill). He has a teenage son Abeer(Pulkit Makol) who comes home after a hit and run case. The guy Abeer gets injured is the son of a local don who is in jail. The rest of the story is as to how the judge Bishan tries to save his son by using his influence and tampering the evidence by taking on the local cops.

Jimmy Shergill gets the biggest role of his career and is like a one-man show in the series. The way he plays a sincere judge and then transforms into a person who wants to save his son, all these acts have been played superbly by Jimmy. The series has a tense atmosphere and Jimmy carries it so well throughout is amazing in every scene with solid performance.

Mita Vashisht, who plays the cop is also amazing in her role and looks quite realistic. The way evidence is pampered by Jimmy, the situations of how a judge can take law in hands, all this is nicely set up. The doubts created for other characters like cops as to what is going on in the story have been set superbly. Also, each episode is just 30 minutes long which makes things even perfect.

The mid episodes get a bit slow and the pace slows down here and there. A few scenes in the narrative like the manipulation of evidence and how Jimmy Shergill takes things in hand looks a bit over the top. The way a government servant takes the wrong to save his son will have objections from a section of the society.

Overall, the latest Hindi web series, Your Honour is a very nicely placed thriller that has a unique premise and taut narration. Jimmy Shergill’s one-man show keeps you on your toes. Though a bit slow in the mid episodes, this series ends as an engaging watch. Go for it.