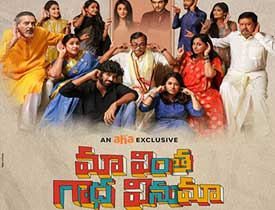 AHA is one OTT platform that has been bringing some good films in the recent past. Today, a film called Ma Vinta Gadha Vinuma has been released. Starring Siddhu Jonnalagadda, let’s now how it is.

Siddhu(Siddhu Jonnalagadda) is a carefree youth who falls for Vineetha(Seerat Kapoor). He tries to woo her for years and finally Vineetha says yes to his proposal in the last year of college. As time passes by, Siddhu and Vineetha head to Goa for her brother’s(Kamal Kamaraju) pre-weddingg shoot. But things change all of a sudden and Siddhu and Vineetha get married in a drunk stage. Upon this, the video of this crazy wedding goes viral. This causes a rift in the love story and the couple break up. The rest of the story is as to how Siddhu wins his love back.

Siddhu Jonnalagadda is a very unerrated actor. He is superb as Siddhu who has ego, and the exuberance of youth. He carries the film on his shoulders and his sincere act is the best part of the film. Siddhu’s dialogue delivery is amazing and it will be good to seem him in good roles in the future.

Tannikella Bharani gets a good role and it was nice to see him on screen after a gap. The conversations between Bharani and Siddhu have been executed well. Fish Venkat does his small part well.

Kamal Kamaraj, Kalpika Ganesh do well in their supporitng roles. Also, the toungue an cheek humor in the film is good. Dialogues need a special mention as they are witty and quite contemporary. Pragati is neat in her small role.

The film is very weak writing wise as the conflict point is not at all strong. The wedding video going viral and famlies getting affected looks nice on paper but it has been rushed in narration. The characters and the pain is not established well in the second half.

The hero has ego issues and the manner in which he understands it and takes responsibility looks forced. The first half an hour of the film is dead boring. For taking the heroine to a party and setting up the love story, the director wastes close to half an hour.

The emotions between the lead pair are not strong as Seerat kapoor’s role does not have much weight. The film is centered around Siddhu and because of this Seerat looks out of place.

Background score of the film is pretty good. The camerawork and production design are very interesting. The screenplay goes for a toss as the emotions do not register in the key second part of the film. The lyrics are neat and as said earlier, the dialogues are superb. Seerat Kapoor’s make up looks horrile and she looks weird in many scenes.

Coming to the director, he has tried to narrate a posh story of a couple who goes wild in a party and how lifes gets affected. But his narration is not that great as the film clicks only in bits in pieces.

On the whole, Ma Vinta Gadha Vinuma is a dramatic take on modern relationships. Though the story looks interesting, the narration is bland and emotions are not so effective. Siddhu Jonnalagadda and his superb performance is the only solace of the film while the other aspects take a beating making this film a dull watch.