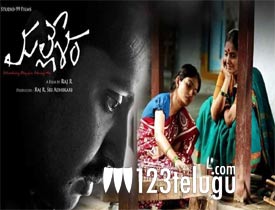 Mallesham is a film which has created a good buzz within the industry from the past few days. The rural drama directed by Raj R has hit the screens today and let’s see how it turns out to be.

The story of the film is based on the life of Mallesham, a Padma Sri award winner who invented the Asu machine. Mallesham(Priyadarshi) and his parents belong to a rural village in Telangana. Mallesham’s mother(Jhansi) is a handloom weaver who works very hard. After staying for long hours on the handloom work, the doctors reveal that if she does any more of the weaving job, her hand can get paralyzed. Seeing this crazy situation, Mallesham decides to invent the a special machine for her mom. Rest of the story is as to what kind of difficulties does Mallesham face in inventing this machine and how he became an over night famous person in his region.

The setup of the film is so natural that you get a feel that things are happening right in front of you. The aesthetics of the Telangana culture are quite real as there is no cinematic liberty that has been taken to depict the troublesome lives of hand loom weavers.

It is a big leap for Priyadarshi in terms of acting with Mallesham. Many might think as to how would a man who is termed a comedian can pull off a biopic. But Priyadarshi proves everyone wrong and is a perfect fit as Mallesham. The manner in which the young actor showcases his helplessness and troubled times through his body language was very good.

Debutante actress, Ananya is a superb find as he is top notch as Priyadarshi’s wife. She suits the role well and things become interesting once she enters the scene. One scene where she denies to give money and her jewelry to Darshi was nicely executed and Ananya’s performance was superb.

Last but not the least, Jhansi surprises you with her emotional act. She looks natural as the lady who is going through health issues. The manner in which she spoke the Telangana dialect and acted with a lot of warmth looks real.

The film takes way too much time to get into the actual point. Many scenes were wasted in showcasing Mallesham’s childhood which was not that necessary. The narration was a bit slow and a crispier screenplay would have made matters better.

The pain which Mallesham goes through does not come across that much which is needed in the film. Some more hard-hitting episodes depicting Mallesham’s struggle would have made a lot of impact. The film is a serious village drama and all those who are looking at time pass stuff can stay away from this film.

Production values of the film are top notch as the art direction department needs a special mention. The manner in which they created a very realistic village set up and showcased the hardships of the people is very good. Music is pretty good and so was the BGM. Camerawork needs a special mention as the film has a special tone which shows the proceedings in an endearing manner. Dialogues are completely in Telangana dialect and lyrics were also good.

Coming to the director Raj R, he has done a decent job as he has showcased the life of Mallesham in a realistic manner. The film is a bit slow but that is how biopics are narrated to get the actual feel. If he would have edited the starting portions and added more drama, things would have been effective.

On the whole, Mallesham is a biopic which has simple and realistic emotions. It is a fitting tribute to the legend Mallesham who put Telangana on to the India map. Priyadarsi’s sincere performance and moving family emotions are huge assets. Films like these might not be everyone’s cup of tea as they have a art film kind of a feel and less entertainment. Barring the slow pace, this film is decent and will not disappoint you once you enter the theater.
123telugu.com Rating : 3/5