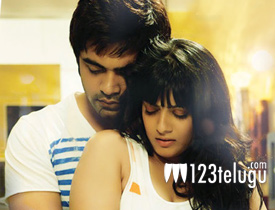 Continuing with the trend of dubbing films, yet another Tamil film which has been dubbed into Telugu is Manmadhan for Sale. Starring Simbhu, this film has hit the screens today. Let’s see how it is.

Arjun(Simbhu) is a London based animator who falls in love with Nisha(Varalakshmi Sarath Kumar). Nisha loves dance and her ultimate dream is to win the prestigious dance competition in London.

As time passes by, Arjun starts disliking Nisha’s dominating nature and her love for dance. To make things work, they enter into an agreement and marry each other.

What is that agreement ? What happens after their wedding ? Does Nisha fulfil her ultimate dream ? To know answers to these questions, you need to watch the film on the big screen.

One of the basic plus points of the film is the interesting story line. A simple boy falling in love with a realistic and mature girl, these elements have been showcased well during the first half. Yesteryear actress, Shobhana impresses big time with her cameo. Simbu does well as the stereo typed lover boy.

Interval block and some emotional scenes during the second half have been executed well. Performance wise, Varalaxmi Sarathkumar steals the show with her mature performance. The way she has brought out the realistic and independent side of today’s generation is just wonderful.

The biggest drawback of the film is lack of emotional depth in the film. Except for a few moving scenes, the basic plot lacks the necessary punch. Even though the story idea is good, the execution takes a beating and the proceedings go haywire in the second half.

The conflict point showcased between the lead pair is quite silly and out of the box. Major problems arise due to these petty issues but they have not been showcased properly. By the time you get to the climax, you are already stressed out with the boring narration.

Camera work needs a special mention as London and the cute love story between the modern pair has been showcased quite well. Music composed by Dharani Kumar is decent but disturbs the flow of the film big time.

Coming to the director Vignesh Shivan, he has disappointed with his execution. Except for the novel story line and the cute love story, the entire film goes for a toss and leaves the audience shattered.

Once in a while, Tollywood producers dub some outdated and flop Tamil movies into Telugu and try to cash in on the craze. Manmadhan for Sale falls into the same category but sadly, the film nor the performances impress you one bit. Don’t even try going near this one and do something very useful this weekend.