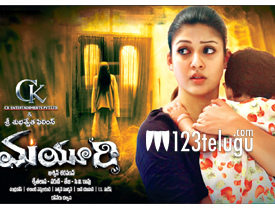 Nayanatara’s latest horror thriller, Maaya has been dubbed into Telugu as Mayuri. Directed by Ashwin Saravanan, this film has hit the screens today. Let’s see how it is .

Mayuri is set against the backdrop of a spooky forest location called ‘Mayavanam’. A lot of research is done and a movie is also made about this location which is haunted by the soul of a married woman named ‘Maya’.

On the other hand, Mayuri (Nayanatara), is a single mother who works as a junior artist in Ad films. One fine day, she comes across this much talked about movie and decides to watch it.

As soon as the movie begins, Mayuri gets a huge shock and finds out that the proceedings in the film have a shocking resemblance to her real life. How is Mayuri related to these incidents ? What consequences does she face after watching the film ? That forms the rest of the story.

Nayanatara is the biggest asset and major attraction of this film. She effortlessly shines in an author backed role and once again proves her acting mettle. Nayan displays superb emotions during tense situations. All the supporting cast does a decent job in their roles.

The first twenty minutes of the film are quite thrilling. Interval bang is executed quite well. The second half is completely packed with some tense spooky scenes which are a huge asset to the film. The background score is yet another highlight and elevates to the proceedings to a decent level.

The story lacks clarity in certain areas which is a huge setback for the film. Despite a thrilling narration, some scenes during the second half get confusing. Nayanatara’s role should have been given much more importance in the second half as she has very less screen time.

After a interesting twenty minutes during the first half, some unnecessary scenes take center stage and spoil the flow of the film. The climax is dragged way too much which is yet another drawback of the film.

As mentioned above, the background score given by Roh Ethan Yoohan is stupendous. Cinematography plays an important role in the film and Sathyan Sooryan did a decent job with his camera work. Some unnecessary scenes could have easily been edited out by T.S. Suresh.

Due credit should be given to Ashwin Saravanan for his directional skills. He does an impressive job in handling the screenplay, but fails to narrate the story in a clear way. The technical values are top notch as the makers have not compromised in bringing a quality film for the audience.

On the whole, Mayuri surprises you with some spine chilling horror elements. Nayanatara’s performance, a thrilling screenplay are huge assets. But a dragged out climax and the confusing story-line spoils the fun to an extent. All horror film lovers will definitely end up liking this film but for the rest it is just another horror thriller.