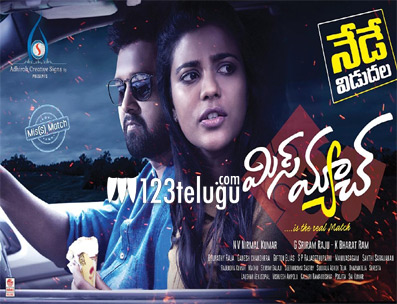 MisMatch is a film that has created a decent buzz all over the Telugu states. The film has hit the screens today and let’s see how it is.

Siddhu (Uday Shankar) is a genius boy right from his childhood. He has terrific memory power and even enters the Gunnies book of World Records. On the other hand, Kanaka Mahalakshmi’s (Aishwarya Rajesh) only dream is to win a gold for the country in the sport of wrestling. As time passes by, these two individuals who have different ideologies fall in love with each and also see crazy problems in their life. What happened to each one’s goals? What happened to their love story? To know this, you have to watch the film.

Hero Uday Shankar was quite impressive in his role. His dialogue delivery, screen presence and the manner in which he falls in love with the heroine, the young actor has showcased them well. One of the major attractions of the film is Aishwarya Rajesh. She was splendid in the film and showcased terrific emotions as a sportswoman. The love scenes featuring the lead pair have been elevated well. The scene where Aishwarya proposes to the hero has been shot quite effectively.

The film has a good concept but the screenplay is not that effective as more drama could have been generated in the film. The movie has many unnecessary scenes in the second half which could have been avoided. The problems between the lead pair should have been exploited even more.

More scenes should have been written to make the lead pair look a perfect mismatch in the film. The film takes a lot of time to reach the actual breakpoint and things kick off only during the break time. The scenes showcasing the sport of wrestling do not create much impact.

Music of the film is pretty decent but the camerawork by Ganesh Chandra is very good as he has showcased the rustic visuals in a very realistic manner. Editing was just about okay as many repeated scenes could have been chopped off to make things better. The production values of the film are very impressive as the money spent is shown on screen. Director Nirmal Kumar’s story idea is good and the way he handled the emotional angle was impressive. But his screenplay should have been even more gripping.

On the whole, MisMatch is the story of a couple who are poles apart. Some love and emotional scenes create a good impact. The climax is also handled well but an improper screenplay and slow narration spoil the flow of the film and make it a below-average watch this weekend.