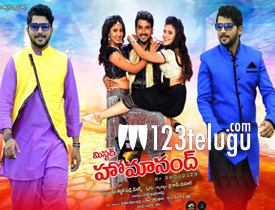 Starring Homanand and Pavani in the lead roles, Mr. Homanand has hit the big screens today. Let us check whether this horror comedy can keep us engaged or not.

Homanand is a sincere man who works hard to fulfill his father’s dream of buying a house. With great efforts and hard work, he finally pools enough money and buys a house. After a few days, he comes to know that there is a ghostly creature in the house which is trying to scare him off the property.

With no other option left, he tries to hit back at the ghost. Will he be successful in getting rid of it? Catch the movie in theaters to know the answers.

Debut hero, Homanand impresses to an extent with his decent performance. The emotional track between a dying father and his son has come out well and may appeal to a section of the viewers. Suman, who acted as hero’s father comes up with a good performance and is a major plus to the movie.

Comedian, Raghu Karumanchi tries his best to evoke a few laughs and provides some much-needed relief here and there. The female lead in the movie, Pavani looks fine and her glamour treat may connect with the masses. Priyanka Sharma, who acted as the ghost did well within her limitations and puts up a decent show.

The movie is filled with flaws and the entire setup looks fragile right from the word go. The movie runs on a very thin plot as the writer tries to cook up an engaging entertainer out of a weak storyline. The half-baked screenplay paired with unimpressive narration further add to the woes.

The first half has absolutely nothing going its way and the fact that you have to sit through the latter half sends jitters down your spines. Sadly, even the camera and graphic works are below par, destroying the entire vibe of the movie. Badly placed songs and shaky background music add to the never-ending list of miseries.

The director, Jai Ram Kumar fails to create a mark for himself with this badly executed horror comedy. His inability to prepare a captivating screenplay plays the spoiler part here. The production values are really poor as the movie is made on a shoestring budget, making it a dull affair all the way through.

The camera work by Murali Krishna is below par. Lack of care towards music and background score make this movie a tedious watch for the audience. Editing is unimpressive as there is no connectivity between one scene to another, damaging the flow of the movie.

All in all, Mr. Homanandam is one such movie that fails for the most part. Poor directional works and dismal production values are the biggest setbacks for this movie. Barring one or two comedy episodes, the movie runs on a dull note and does not rake up the intensity at any point making this a forgetful watch this weekend. Ignore it completely.