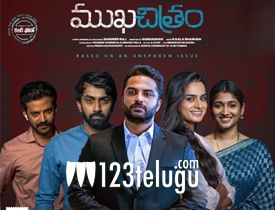 Yet another small film named Mukhachitram has hit the screens today. The film has Vishwak Sen in a cameo and is directed by Gangadhar. So let’s see how it is.

Raj Kumar (Vikas Vasishta), an eminent plastic surgeon, likes a girl, Mahathi (Priya Vadlamani), and marries her. But another girl named Maya Fernandez (Ayesha Khan) keeps loving him since childhood, and Raj’s marriage causes her disappointment. When all is going well, a series of events take place, which makes Raj’s life upside down. What are those incidents? How did they affect Raj’s life? How is Dr. Satya (Chaitanya Rao) part of Raj’s life? Watch the film to learn the answers.

The makers need to be appreciated for picking a sensitive yet relevant concept and presenting it without any hesitation. The social message conveyed is the heart and soul of the film, which makes the audience think deeply. Having Vishwak Sen in the crucial climax episode brings additional value to the film, and the actor is good in his brief cameo.

The second half of the film is decent, which is when things start becoming serious and engaging. Again, the key twists presented here are good and create an impact. A few scenes are well justified and linked in the latter hour, which was impressive.

The surprise package of the film is Priya Vadlamani. She was stunning in the key sequences and did her part with composedness. Priya’s performance was very effective as a traditional girl, and her character is also well-written. Vikas Vasista is fine in his role. Chaitanya and Ayesha Khan were good too.

While the makers were successful in coming up with a good concept, the narrative wasn’t that engaging, reducing the impact of the film as a whole. A better screenplay with less length would have done wonders. The comedy in places didn’t work.

The director takes his own sweet time to establish the actual plot, and this is when the viewers might get bored. The whole first hour doesn’t have much with regard to the plot. The romantic track between the lead pair here wasn’t effective. It is only towards the interval things start getting exhilarating.

Again the first few minutes in the last hour were wasted. In places, the film went slightly overboard and melodramatic. Had things been kept normal, the message could have been even more impactful. In addition, a few logics are missed in the film, which should have been demonstrated clearly.

The background score by Kaala Bhairava is powerful in key scenes. The songs aren’t that great, though. The cinematography by Sreenivas Bejugam is fine, and so are the production values. However, the editing team should have removed a few unnecessary scenes and trimmed down the film a bit.

Coming to the director, Gangadhar, he did a passable job with the film. While the story penned by Sandeep Raj is compelling, the execution was middling. More care was required regarding the first hour, which also is slow. The plot should have been established a bit earlier in the film. The team got perfect artists who gave their best.

On the whole, Mukhachitram has a relevant topic that works just in parts. The second hour is passable, with decent twists and fair performances. But to enjoy all this, one has to go through a lousy first half. If you are okay with this aspect, give this film a shot for the message it carries.