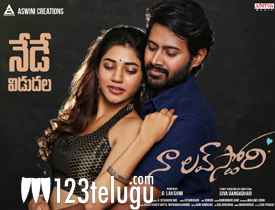 Continuing the trend of small films, yet another romantic entertainer titled, Naa Love Story has hit the screens today. Let’s check how it is.

Prashanth(Mahidar) is a graduate who enjoys his life without any tensions. On the other hand, Nandini(Sonakshi Singh) is a disciplined girl who leads a conservative life with her family. What happens when these two contrasting characters fall in love? What kind of ideological differences arise between them? How will they solve their problems? To know this, you have to watch the film on the silver screen.

Mahidar is okay and gives an impressive and settled performance in his role. Especially, his acting in a few emotional scenes with his father is very good. Heroine Sonakshi Singh shines in an innocent and traditional girl’s role. Her expressions and homely looks are added advantage for the film.

Senior actor Madhu Thotapalli, who essayed the role of hero’s father did a good job and the same is the case with the actor, who played heroine’s father. His performance is impressive in a dignified role. Jabardasth fame Chammak Chandra evokes a few decent laughs here and there throughout the film.

Most of the film’s proceedings have double meaning dialogues and vulgar jokes which may not appeal to the larger section of the audience. Though the basic story line of the film is decent, it lacks proper depth in the narration and many scenes look boring and unengaging.

Apart from a few emotional scenes, lead artists performance in rest of the scenes looks artificial and dilutes the depth in the scene. Yet another drawback of the film is its uneven screenplay which is a major failure.

Director Siva Gangadhar has come up with a decent storyline but the problem is with his execution part. None of the crucial scenes were handled properly by him. Editing work is just about okay. Cinematography by Y.E Kiran is decent as he captured some good visuals. Veda Nivas’s music is good and background work is also neat. Production values for this low budget film are okay.

On the whole, Naa Love Story is yet another old-school romantic drama which lacks proper depth in every aspect. Routine characters, outdated plot and insensitive narration spoils the mood of the film and makes it a tedious watch this weekend. Avoid it.