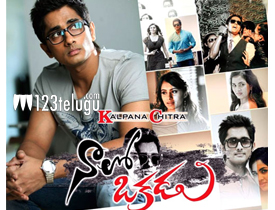 Siddharth is back to the Telugu screen with his latest flick Nalo Okkadu. This film , directed by Prasad Ramar, has hit the screens today. Let’s see how it is.

Vicky(Siddharth) is an ugly looking poor man who works in a movie theater. He has many aspirations in life but always keeps them to himself. One fine day, he finds out about a drug which will take him back in time and fulfill his dreams.

He eats the pill and starts dreaming of a posh life where he is a huge superstar. Twist in the tale arises when complications start arising in both his real and dream life. What are those problems and how did Vicky come out of them successfully forms the rest of the story.

Siddharth gives a memorable performance in the film. Once again he proves his talent and mesmerizes in both his characters. He plays two different roles and brings a lot of depth to the film. Deepa Sannidhi portrays her role well and provides ample support to Siddharth.

Story and narration of this film is quite new to Tollywood and has been handled well. Screenplay is the key for any thriller and it scores brownie points in this flick. The way all the scenes have been interlaced is pretty good.

The way both the stories in the first half have been executed is good. Both the stories run on a parallel track and have some very engaging moments. Climax is the major plus point of this film and has been dealt well.

As the film runs on two parallel tracks, it becomes a bit confusing for the normal audience. There are many loop holes in the script and several questions are answered only during the climax.

Second half of the film becomes a tad slow as the proceedings take time to evolve. This film is not for those who seek popcorn entertainment. There is absolutely no commercial angle to the film as the plot moves on a serious note.

Production values of the film are pretty good. Director Prasad Ramar is a talent to watch out for. He has managed to execute a complex story quite decently. Even though his narration causes a bit of confusion, the way he brings out varied emotions from his characters is pretty good. Camera work is brilliant and showcases the mood of the film well. Background score is decent and so are the dialogues.

On the whole, Nalo Okkadu is quite an innovative concept which is rarely tried in Telugu films. Siddharth’s scintillating performance is the basic asset of this film. On the flip side, a complex story and a confusing narration might not go well with regular audience. All those who like psychological thrillers can give this film a shot and the rest can watch it on TV.