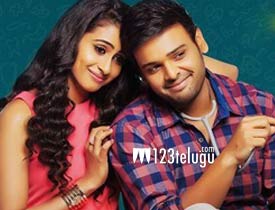 Yet another star son, Naveen Vijay Krishna is making his movie debut with the film Nandini Nursing Home which has hit the screens today. Let’s see how it is.

Chando(Naveen Vijay Krishna) is a young man who is extremely possessive about earning big money. He lands in Hyderabad and joins the famous Nandini Nursing Home as a fake doctor. The twist in the tale arises when some untoward incidents start happening and spoil the hospital’s reputation.

What are those incidents ? Who is behind all these things ? and Why did Chandoo join Nandini Nursing Home ? The answers to all these questions form the rest of the story.

One of the biggest surprising elements of this film is the suspense factor which has been maintained until the end. Also, the way it has been induced in the commercial comedy is very impressive and holds the film completely.

Navin Krishna makes a striking debut. He is very impressive with his performance and fits his role perfectly. He has a very good screen presence and can go a long way if he chooses interesting films like Nandini Nursing Home. Both Nithya Naresh and Shravya have done a decent job in their respective roles.

The way the suspense elements have been revealed during the pre-climax and climax have been narrated extremely well. Comedy evoked by Vennela Kishore, Shakalaka Shankar, and Saptagiri works well for the film. The love story showcased between Navin and Shravya is quite refreshing.

The length of the film is a tad too long as many scenes could have been edited to make the film, even more, crispier. After a point of time, the proceedings become slightly slow. Even though the Vennela Kishore and Saptagiri comedy track is good, it has been stretched a bit too much.

Some realistic scenes featuring the death of a patient and how the hero’s character behaves post that incident is slightly over the top. Certain logics go missing in the film, making things over the top. A few songs here and there should have also been edited out to make things better.

Production values of the film are very impressive. The decent camerawork showcases the Nursing home in a splendid way. Credit should go to art direction department for making use of the various locations in the hospital in a very innovative way. Editing is just about okay but the background score is effective.

Coming to the director P V Giri, he has done a very good job with the film. Narrating a commercial film with a good amount of suspense is no joke and the director gets full marks for his skill. Had he decreased the run time a bit, the effect would have been even better.

During the release of this film, nothing much was expected from Navin Vijay Krishna. But the young actor surprises everyone and makes a superb debut. The major asset of the film is the way both comedy and suspense have been narrated quite cleverly. If you ignore the slightly lengthy runtime, Nandini Nursing Home ends up as an entertaining watch this weekend.