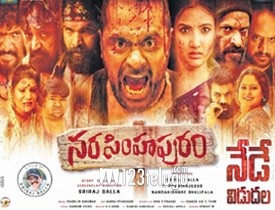 Continuing the trend of low-budget films, one more film that has come out today is Narasimhapuram. Nanda Kishore plays the main lead in this and let’s see how it is.

Nanda(Nanda Kishore) is a young man who forgets his past and becomes a lunatic. He is taken care of by Siri(Siri) like his own family member. Why did Nanda become a lunatic? Who is Siri and why is she helping Nanda? What is the whole tragedy and story behind Nanda? To know all this you have to watch the film.

Nanda Kishore does his crucial role as a lunatic quite well. He showcased good emotions and has done in the entire film. The sister sentiment in the film is decent. The scenes related to true love have been showcased quite well.

Lakshmi’s NTR fame, Vijay Kumar does well in his role and evokes some comedy as well. Heroine Siri is also decent in her role and has performed to the best of her capabilities. Sampath and other supporting casts also do well in their roles.

One of the biggest drawbacks of the film is the unengaging screenplay which fails to excite. The scenes look dull and the film takes a lot of time to come to the main theme. There is no proper flow in the first half and this is where things get boring for the audience.

Most of the comedy looks forced in the film. Yet another drawback is that the main conflict of the film is left aside as the makers engage in unnecessary scenes which have no effect on the audience.

The characters in the second half have no proper weight. Their characterization is very weak and because of this, the narration goes for a toss. A simple story is molded and twisted for no reason.

Production values of the film are just about okay. The music of the film is below par and so were the dialogues. The editing is pathetic as so many scenes could have been chopped off. Coming to the director Sriraj, he has done a below-par job with the film. He has no grip on the screenplay and because of this, the film falters in many areas.

On the whole, Narasimhapuram is a poorly made drama that fails to create any effect. Barring the sincere performance of Nanda Kishore, this film has nothing much to showcase and can be left alone this weekend.