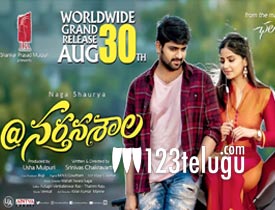 After the super success of Chalo, Naga Shourya is back with yet another comedy caper called Nartanasala. After a good round of promotions, the film has hit the screens today. Let’s see how the film turns out to be.

Naga Shourya is a young man who always wants women to be independent in life. In this process, he solves a girl called Manasa’s(Kashmira) problems and falls in love during the course of time. Just when things seem to be going fine, his dad(Sivaji Raja) fixes his match with Satya(Yamini Bhaskar).

To avoid this tricky situation, Shourya reveals to Satya’s family that he is a gay. Rest of the story is as to how Shourya manages his gay act and finally marries the one he loves.

Naga Shourya does a neat job with his gay act and was particularly good during the interval block. Yamini Bhaskar looks beautiful and does her role quite well in the film.

Comedian Raghava evokes decent laughs in his role of a drunkard son in law. Sivaji Raja gets a good role after a long time and he is impressive as the hero’s dad. Character artist Sudha was okay and so is Viva Raghav who played hero’s friend.

The first half is pretty disappointing as there is nothing much ingesting going on until the interval block. Though the film starts off on a decent note, what follows is a dull and insipid narration from the director. None of the scenes make any sense and emotions look artificial.

Even though the comedy works in certain areas, it is overdone for certain characters. The gay comedy written for Ajay in the second half looks over the top. Songs disturb the flow in a big way spoiling the mood of the audience.

Production values of the film are decent as the setup looks rich in many areas. Music by Sagar Mahati is disappointing as not even one song is hummable. Camera work is just about okay and so was the art direction. Editing is below par as at least 15 minutes of the first half could have been easily trimmed.

Coming to the director Srinivas, he has failed in the execution part comepletely. Though he has written the gay comedy well, he failed to narrate the rest of film in a decent manner. Whenever the gay comedy comes on screen, the film looks fun but when other scenes are showcased, things get bland, boring and outdated.

On the whole, Naga Shourya fails to continue his success streak with Nartanasala. The film has a week storyline, insipid narration, and over the top emotions. The only solace of the film is the gay comedy which is good in bits and pieces. If you are one who does not mind over the top comedy, give this film a shot but the rest can take it easy and look for something interesting this weekend.