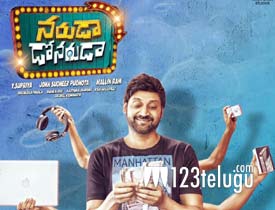 Akkineni hero, Sumanth has pinned a lot of hopes on his latest release Naruda Donaruda. Remake of a hit Hindi film Vicky Donor, this film has hit the screens today. Let’s see if Sumanth gets his much-needed hit.

Vicky(Sumanth) is a jobless youth who is not at all serious in life. One fine day, he comes across Dr. Anjaneyulu(Tanikella Bharani), an infertility specialist who forces him to become a sperm donor.

Initially, Vicky hates this idea but later takes it up for easy money. This is also the time when he falls in love with Ashima (Pallavi Subhash) and marries her.

How will Vicky manage his life as a sperm donor ? Does Ashima know about Vicky’s profession ? What problems does the couple face ? That forms the rest of the story.

Naruda Donaruda becomes watchable mainly because of Tanikella Bharani. The legendary actor does a very good job as Dr. Anjaneyulu. Bharani does not get influenced by the original character and gives his own touch to his role. All his dialogues and mannerisms are quite good.

Sumanth does a decent job in his role and performs to the best of his capabilities. The confrontational comedy scenes between Sumanth and Bharani evoke decent laughs and have been designed well. Veteran comedy actress, Lakshmi gets a meaty role after a long time.

One of the biggest drawbacks of the film is that it is very loud. The supporting characters are showcased in a loud manner which irritate the audience. The second half of the film is completely rushed as the emotions do not hit you at all until the climax.

Yet another drawback is the choice of the heroine Pallavi Subhash. The heroine’s role is quite crucial during the second half and an inexperienced actress like Pallavi lets things down. The way her character is showcased in a hurried manner is also quite disappointing.

The second half is quite bland with not many emotions elevating the film. Vicky Donor clicked mainly because of the earthy feel and realistic characters which are completely missing in the film.

Production values are good as the film is set up in a decent manner. Background score during the climax is okay and elevates the film well. Music is very disappointing as all the songs come in as huge speed breakers. Editing is average. Dialogues are very good and the one-liners written for Bharani are quite witty.

Coming to the director Mallik Ram, he has done a below average job with the film. His inexperience is clearly shown throughout the film as he does not handle the complex points of the film well. The way he etches out his characters and makes them go over the top goes against the film to an extent.

On the whole, Naruda Donaruda is definitely a bold attempt from Sumanth. He needs to be credited for choosing a risky subject like this and decisions from actors like him can take Tollywood forward. But sadly for Sumanth, the narration is quite disappointing as the film suffers heavily from lack of emotions and is a strictly for adults only. If you completely forget the original and get along with the bold content of the film, you can give this film a shot for Tanikella Bharani and his hilarious act.