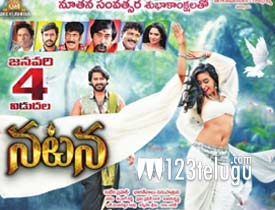 Along with a few other low budget films, a movie named Natana has hit the screens today. Veteran actor, Bhanu Chandar plays a key role in this film which has been directed by Bharati Babu. Let’s see how it is.

Mahidar(Sriram) is an aspiring actor who falls in love with Janaki(Sravya Rao). On the other hand, Mahidar and his friends get duped by an agent called Shankar Anna(Prabha Sreenu) who takes them to the bungalow of Bhupati(Bhanu Chandar) in order to rob him. Not knowing this fact, the group enter the bungalow and start getting killed one after the other. Who is this Bhupathi? Why is he targeting Mahidar and his friends? and how did Mahidar escape this tricky situation is the whole story of the film?

Hero Mahidar was okay for his first film. Even though he looked rustic at the beginning, he coped up well and did a decent job in his role. Coming to the heroine Sravya Rao, she did a great job with her performance. Not only glamor wise but also during the crunch climax scenes, she was very good.

It was good to see veteran actor Bhanu Chandar in a key role after a very long time. He plays a negative role and was the highlight of the film with his expressions and careless attitude. Comedy by Raghu Babu, Prabhas Sreenu evoked a few laughs here and there.

The first half goes wrong completely as scenes have been just added just to kill the time. The proceedings do not make any sense and the comedy that comes during this time irritates you completely.

Even though the director had a good premise, he spoiled it with his uneven narration. There are a number of haphazard scenes which do not make any meaning in the film.

The logic goes for a toss as the audience can easily find out the mistakes in many scenes which do not create any impact. The climax could have been elevated in a solid manner but the director failed to utilize it.

Music by Prabhakar Praveen is okay as one of the songs was good. His background score was neat in the second half. Editing is crisp and the production values of the film were pretty good. Coming to the director Bharati Babu, he has done a disappointing job with his execution. He could not narrate the film as written on paper and killed the first half completely. Even in the second half, the proceedings were not that gripping as the film fell flat on its face.

On the whole, Natana is a film which has no direction at all. Even though the plot is a bit interesting, the execution was horrible and takes the film down in no time. Logicless scenes, abrupt climax and lack of depth in the characters makes this film a disappointing watch this weekend. Just stay away from this one.