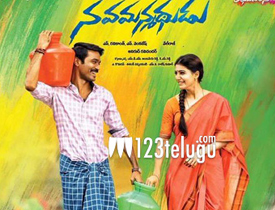 The Dhanush, Samantha and Amy Jackson starrer, Nava Manmadhudu has finally opened today after facing some release problems. Let’s now see how the film turn out to be.

Bharath(Dhanush) is simple middle class boy who leads a happy life with his parents. During his younger days, he falls in love with Hema(Amy Jackson) and spends some precious times with her.

As time passes by, the couple get into a spat and break up with each other. A depressed Bharath takes up a small job in his father’s office and eventually marries Yamuna(Samantha) who is his parent’s choice.

As time passes by, tragedy strikes the family and Bharath’s father( K S Ravi Kumar) commits suicide because of a huge problem. The entire responsibility of the family now falls on Bharath’s shoulders. Rest of the story is as to how Bharath overcomes these problems and also deals with his newly married wife.

One of the biggest assets of the film is the love story between Amy Jackson and Dhanush. The love story looks quite fresh and has been executed extremely well. The various emotions, romance and conflict point have been dealt in a superb way and forms most part of the first half.

As the film moves into the second half, the mature love story between Dhanush and Samantha is nicely executed. Dhanush is superb in his role and has two different shades to portray. It was quite a difficult character for him to portray and the young star does it with aplomb. Samantha looks and suits her part aptly. She throws away her star image and carries a de-glam role with a lot of ease.

Amy Jackson is superb in the first half and strikes superb chemistry with Dhanush. Acting wise too, she has done a good job. The various middle class emotions and the bond between the family members have been executed quite well. Both K S Ravi Kumar and Radhika play their supporting roles well.

The basic drawback of the film is the thin story line which is quite routine and predictable. The only difference here is that the makers have added two different love tracks and have mixed family emotions along with it.

Though not a drawback, the film dips into a very serious mode after a very entertaining first half. The entertainment value is slightly missed here as the proceeding get quite slow. Some of the emotions shown are quite old school and do not exist in the present day age.

One of the biggest assets in the technical department is the music. Anirudh has done a superb job with the music score. All the songs are superb and have also been shot realistically. But what takes away the cake is Anirudh’s background score which is thumping. Camera work is yet another winner as the middle class set up has been shown in a realistic way. Dialogues are natural and so were the production values.

Coming to the director Vel Raj, his story idea is very good but the execution part slightly falters during the second part. Too much of predictability and melodrama make Nava Manmadhudu a routine experience during this time. Had he worked a bit more on the second half, the output would have been even better.

On the whole, Nava Manmadhudu is a feel good family entertainer which has its moments. A superb first half, striking performances by the lead pair are basic assets. On the flip side, a slightly slow and predictable second half and an outdated story line makes this film watchable for those who like simple and realistic emotions.