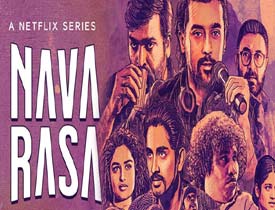 Netflix original anthology series Navarasa premiered on the platform today. The series features the likes of Suriya, Vijay Sethupathi, and Siddharth in the lead roles. Scroll on to read our review of the series.

This episode stars Vijay Sethupathi in the lead role and it revolves around revenge and regret. The emotional core is gripping but the ending sequence looks a bit fabricated.

This is one of the better episodes in the series and as the title suggests, it is a comical one. The actor who played the younger version of Yogi Babu delivers an excellent performance. This episode offers genuine comedy and it keeps the viewers engaged right from the start.

This episode feature Arvind Swami. It revolves around a futuristic plot but doesn’t have the impetus to keep the viewers engaged. The narrative relies heavily on hyper fiction and it doesn’t cater to all sections of the audience.

This episode revolves around the life on an insecure elderly man. The narration is too slow and the ending isn’t convincing enough either.

This episode features Bobby Simha and Gautham Vasudev Menon and it is set in a war backdrop. Despite its crisp run time, the episode doesn’t hold the attention for too long as the plot lacks emotional connect.

This is arguably the best episode of the series. It has the most potent plot of all and the director makes full use of it. The emotional angle works quite well and the drama that has been evoked is organic.

This episode features Siddharth and it is a mixed bag. After a promising start, the subplots set in and they aren’t engaging enough. The climax portion is good though.

This is the second episode in the series that is set in war backdrop and much like the first one, it lacks an an emotionally engaging core. There is a whole lot of action but strictly limited novelty.

This episode features Suriya and it is powered by fine performances from the lead pair. The conversations are a bit too lengthy but the chemistry between the pair make the episode a watchable one.

Navarasa is an anthology series consisting of 9 episodes which depict 9 different stories. Episodes 2 & 6 stand out, thanks to gripping storylines. The rest have their own share of bright moments and flaws as well.