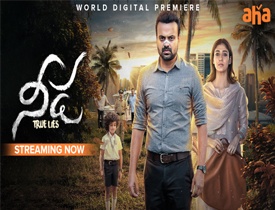 Continuing the trend of reviewing shows and movies on OTT, today’s film is Needa, the Malayalam dub film starring Nayanthara. The film is out on AHA and let’s see how it is.

Sharmila(Nayanthara) lives alone with her eight-year-old son Nithin who has the knack for telling crime stories to his classmates. One of Nithin’s classmates reveals this quality to his dad, John Baby(Kunchacko Boban). John finds Nithin’s stories interesting and gets a shock when he comes to know that some stories have happened in real life. How is Nithin managing to tell these stories? What is Sharmila’s connection to all this? and what is the whole mystery about? That forms the story.

Kunchacko Boban does well in his investigative role. The way his role has been etched is also good in the film. But the main highlight is the boy who played Nithin. The story runs on him and he does a very good job in holding the screen for the most part.

Coming to Nayanthara, she has done a good job but her role is not that great. More elevation and screen time should have been given to her. The twists showcased in the end are also passable. The camera work and production design are quite good.

Though the twists are good, the manner in which they are unraveled is not that great. The film starts on a slow note and does not have the great pace or thrill that the thrillers have. The makers take their own time to bring in the twists and enter the main story a bit late.

The way Kunchacko Boban gets involved in the case and the way he operates things look a bit odd as well. The manner in which screenplay is dealt with in the latter part is also not that great. Thrillers need to have more drama but Needa misses this aspect in many areas.

Malayalam films are always strong in their technical aspects and the same is the case with this film as well. The visuals, production design, and locations are quite good. BGM is decent but the Telugu dubbing could have been better. Coming to the director Appu, he has done a passable job with the film. Had he managed to have a rach screenplay things would have been even gritty for the audience?

On the whole, Needa is a film that has a very interesting premise and is narrated well for the most part. But the steam goes down in the last half an hour disappointing the audience. All those who like thrillers can give this film a shot for its slick production values and star cast.