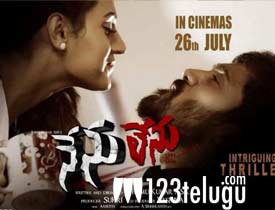 Continuing the trend of low budget films, yet another movie which has hit the screens today is Nenu Lenu. Read on to see how the film turns out to be.

Eeshwar(Harshit) is an orphan who falls in love with Parvati(Sri Padma). He tries hard and somehow woos her to become his life partner. On the other hand, there is a gang who is trying hard to kill Eeshwar. As time passes by, a piece of news comes out that Eeshwar has killed four goons and is missing completely. Who is this gang? Why are they after Eeshwar? Did he commit all the crimes? To know this, you need to watch the film on a big screen.

Hero Harshit is very impressive in his role. Be it his dialogue delivery, his expressions, and dances, Harshit has done well. The heroine, Padma also looks good and did a decent job in her role. The chemistry of the lead pair is quite impressive and showcased good screen presence and comedy in the film.

The basic concept of the film looks good on paper. The key roles played by the supporting actors are also good. Dialogues of the film need a special mention as they are impressive. The mannerisms executed for the heroine look different and unique.

The basic feel of a psychological thriller is completely missing in the film. Except for some romantic scenes in the first half, there are not many gripping scenes during this time. The director tries to showcase the second half in an emotional manner which looks good on paper but the effect is not good when it comes to the execution part.

The pace of the film becomes slow as many unwanted scenes could have been trimmed completely. The conflict between the lead pair is also not that strong. There are many scenes in the film which look forced and could have been toned down.

Music by Asrit is decent and so was the background score. Editing is horrible as many scenes could have been trimmed to make things better for the audience. Camerawork by Srikanth is decent and so were the production values. Coming to the director Ram Kumar, though he has written a good concept on paper, he did not execute it well on screen.

On the whole, Nenu Lenu is a psychological thriller which has a good concept but falters with the execution part. Except for the lead pair’s performance, several forced scenes, lengthy runtime and dull narration spoil the mood of the audience and make it a disappointing watch this weekend.