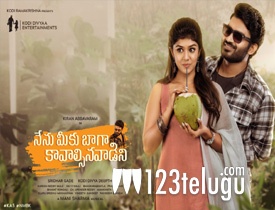 Nenu Meeku Kavalasina Vadini is Kiran Abbavaram’s latest film which has hit the screen today. The film has been produced by Kodi Ramakrishna’s daughter and let’s see whether it lives up to the hype created or not.

Teju(Sanjana Anand) is an alcoholic who uses a cab back to her house on a daily basis. Vivek(Kiran Abbavaram) who is the cab driver helps her out and asks about her past. On the way back home, Teju narrates her break up story to Vivek. In the second half, Vivek reveals his love story to Teju. Both the love stories have a connection. What is that connection? And who is Vivek? To know the answers, you need to watch the film on the big screen.

One of the biggest assets of the film is the music by Mani Sharma. All the songs are peppy and have been shot quite well. Veteran director Krishna Reddy does a small role and he was neat.

The second half has a proper story and there is flow in proceedings. The comedy scenes featuring Baba Bhaskar and hero Kiran evoke a few laughs. Baba Bhaskar’s dialogue delivery is hilarious.

Kiran Abbavaram is a major attraction for the film. This time, he has gone mass and looks cool in all the fight sequences. He also danced well and changed his dialogue delivery which suits the mood of the film well.

The second heroine Sona Thakur was effective in her role. A few family scenes in the second half are okay. The basic plot looks neat but is let down by the director.

As said earlier, the basic plot of the film looks decent but the twists chosen are effective. They are not presented in a proper manner by the director as his narration is not at all gripping.

The film comes to its main conflict point only during the last ten minutes and by then, the audience loses patience. The heroine narrates her story in the first half and the hero does the same in the second. As too much time is taken for these love stories, there is hardly any time left for the new romance to be built up.

With just a simple scene, the twist is cleared and the film comes to an end. All this looks quite rushed. The film was projected as a family drama but there is no proper drama depicting these family emotions. The main lead, Sanjana Anand has a key role but she sadly could not pull it through with her weak screen presence. Probably a more noted heroine would have made matters a lot better.

Coming to the director Sridhar Gade, he has made a big mess with the interesting storyline. He focused more on the love stories which are bland and have no proper emotions. Had he cut short the love stories and concentrated on the actual part of family drama and love between the lead pair, things would have been quite effective.

The film lacks seriousness as the family drama, emotions, romance, not one aspect is highlighted and the film is ended in an hush hush manner which is disappointing.

On the whole, Nenu Meeku Baaga Kavalasina Vadini is a romantic family drama which lacks strong emotions. The music and a few comedy scenes are good but the lack of gripping narration makes the film a dull and boring watch this weekend and has nothing new to showcase.