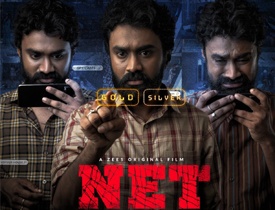 NET, a tech thriller starring Rahul Ramakrishna and Avika Gor in the lead roles is streaming on ZEE5. Here’s our review of the film.

Laxman (Rahul Ramakrishna) pays exorbitant subscription fees to live stream the private lives of young couple, played by Avika Gor and Vishwa through illegal spy cameras. What are the consequences for his malicious acts? The answer to this question forms the rest of the plot.

The film has a good premise. The concept of watching the lives of others through illegal cameras that forms the core plot of the film sounds interesting. There is that unpredictability factor through the course of the film.

Rahul drivers an top-tier performance in the complex role. Avika looks good on the screen and she comes up with a natural performance. The drama that is generated through the cyber crime and the way it affects the lives of others is organic.

The film doesn’t end on the right note as the climax portion is rushed. The story isn’t rounded off in a compelling manner. The ending is a tad convenient as well.

The film unfolds at its own pace and it doesn’t cater to all sections of the audience. The narrative is a bit slow-paced in the middle portion. The subplot pertaining to one of the lead characters is formulaic and it isn’t as effective as one would have liked.

Debut director Bhargav Macharla succeeds in extracting good performances from his lead cast. He handles the drama part well. But he should have focused more on the ending portion. Background score is riveting and it elevates the intensity. Cinematography is neat.

NET is a tech thriller that makes for a partly engaging watch. It starts off on a bright note and loses momentum in the middle portion. Had the ending portion been more engaging, the film would have made for a good watch. The Rahul Ramakrishna starrer is a passable one-time watch.