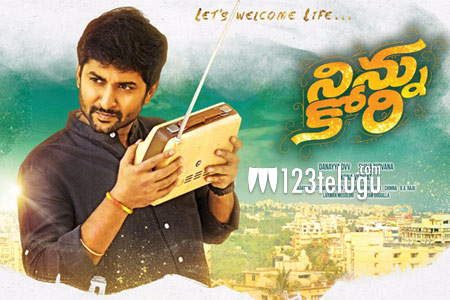 The complete audio of Nani’s Ninnu Kori is finally out today. Composed by the talented Gopi Sundar, let’s now see how this album turns out to be.

Analysis: The album kicks off with a soothing romantic ballad Unnatundi Gunde which hits you instantly. Probably, one of the best romantic numbers in the recent times, this song clicks primarily because of Karthik and Chinmayi’s melodious singing. There is an old school charm to this song and at the same time, it is quite contemporary with some catchy chorus lines. The orchestration is simple and is arranged according to the mood of the film. It will be an even bigger hit once you watch the beautiful visuals.

Analysis: The second song on the album is Adigya Adigya which is like a stylish cover version of a super hit song. Once again, the mood is quite romantic and takes you on a joyful ride with its beautiful lyrics by Sreejo. Already, the song has caught on quite well and such montage numbers with minimal orchestration will sound and look even better once you see the romantic chemistry between the lead pair on screen.

Song 3: Once Upon A Time Lo

Analysis: Moving on, the third song in the album is Once Upon a time which is a fun number where the hero is narrating his love story in a quirky manner with a lot of fun lyrics. Gopi Sundar keeps the mood of the song quite upbeat through his energetic beats. Even though the song starts off with some humorous lyrics, it becomes a break-up number mid-way through and turns massy which is very interesting. Such songs will hit you more after listening to them multiple times.

Analysis: The fourth and last song on the album is Badulu Cheppave which is a like a heartbreak song. Generally, musicians make it with a lot of pathos but Gopi Sundar composes this number with some upbeat sounds which are quite stylish. Once again, the lyrics are heartful and have been written with a lot of depth and makes this song quite interesting to listen.

Off late, Nani has been taking good care of the music part in his films. It was clearly visible with Nenu Local which had some hit numbers. Staying true to its genre, Nani’s new film album, Ninnu Kori has some lovely romantic numbers composed soothingly by Gopi Sundar. Unnatundi Gunde, Adigya Adigya and Badulu Cheppave are our picks and will surely get you hooked after listening to them multiple times. Finally, Nani has a winning album as Ninnu Kori’s songs are clearly aimed at the classes and Gopi Sundar is spot on with his improvisation.