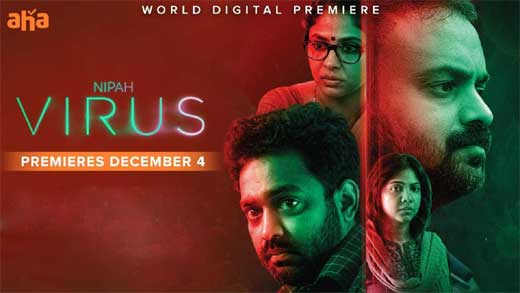 When the deadly Novel Coronavirus outbreak began in India, acclaimed Malayalam medical thriller, Virus, was much-talked-about all over the country. The film, released in July, 2019, was based on the deadly Nipah Virus that wreaked havoc on Kerala in 2018. The film has been dubbed in Telugu as Nipah Virus and had its digital premiere on Aha on December 4. Let’s see how the film is.

The story is set in Kozhikode, Kerala, where the outbreak of Nipah Virus gripped the entire state. Zachariah Mohammad gets admitted to the Government Medical College with severe cough and vomitings. He passes away even before the doctors could identify his virus. After a few days, Nurse Akhila (Rima Kallingal) gets admitted to the hospital with similar symptoms. This gets the entire government machinery, including the state Health Minister and District Collector, get into the mission of tracing the root cause. How the government contains the virus outbreak and the issues the victim’s families faced in the society make for a thrilling and emotional watch.

Director Aashiq Abu‌ comes up with a riveting thriller around the invisible virus that claimed scores of lives in Kerala’s Kozhikode and Malappuram districts. The way he realistically showcases the emotional turmoil of the victims and their families, the relentless determination of the doctors in saving their lives and the government’s mission to prevent the virus spread deserves a special mention.

Coming to the actors, even though most of the lead actors are new to Telugu audiences except Revathi, they arrest the viewers with their earnest and natural performances.

Even though Aashiq Abu‌ chose a terrific storyline, the screenplay and treatment he followed to narrate the story should have been more pacy to make for an engaging experience. Certain scenes in the first half should have been trimmed to add some pace to the proceedings.

All the technicians have done their best in assisting the director’s vision. Especially, music composer Sushin Shyam’s poignant background score adds to the pensive mood. Rajeev Ravi is one of the best cinematographers in India and he proves it yet again with his visuals, perfectly assisted by Shyju Khalid. The production values are decent even though most of the film is centred around hospitals and government offices.

Nipah Virus was a huge test to humanity. The director’s thought behind coming up with an emotional thriller that faced this greatest adversary must be appreciated. Barring the slow pace in certain portions, the film is quite riveting. Nipah Virus is recommended for those who appreciate emotional medical thrillers. The film will make a lasting impression especially when the Coronavirus pandemic has the entire world at its feet.