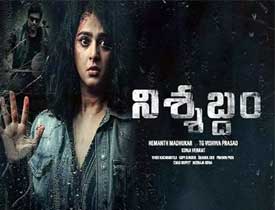 So, continuing the series of reviewing movies and shows during the lockdown period, our today’s pick is the Telugu film Nishabdham. The film has skipped its theatrical release and is out on Prime Video. Let’s see how it is.

The story is set in a haunted house in Seattle. In 1970, a couple dies there in mysterious circumstances. Years later, a couple with names Sakshi(Anushka) and Anthony(Madhavan) come there for a prestigious painting. In a sudden change of events, Anthony gets killed and Sakshi escapes from there. The case is handed over to cops Maha(Swathi) and Richard(Michel Madsen). Who killed Anthony? What is his relationship with Sakshi? and how did Maha solve the case forms the rest of the story.

The production values of the film are top-notch as the visuals are no less than a Hollywood film. Anushka leads from the front and is good in her role as a mute. Anushka did well with the sign language and her look is also good. Madhavan as always is superb in his crucial role. He brings a lot of depth to the film and his character has been justified quite well in the end.

Subba Raju gets a major role and he is quite effective. Anjali plays a US cop and looks her part. Coming to Richard Madsen, he is good only in the last stages of the film.

Shalini Pandey does well as the girl who is quite possessive. The film is started off in an interesting manner and the twists are revealed in a neat manner. A few scenes where Anjali chases Richard Madsen have been showcased quite well.

One of the biggest minus points of the film is the way the film is ended. Once the major twist is revealed, the film becomes hugely predictable. The pace slows down completely and too much time is wasted to showcase the clarity in the story. The film has some logical errors in the story. The way crimes are showcased in such an easy manner and how things are not tracked by US cops is a bit unbelievable.

Also, there is an easy doubt that arises in one’s mind that this particular person might be the villain in the film. Such things should have been showcased in a more gripping manner. Also, the film has a dull screenplay, and the way Shalini Pandey’s role is showcased in a very possessive manner looks a bit odd.

Though Anjali does her cop’s role well, too many liberties have been taken, and the way she dominates her seniors also looks a bit odd and that too in a country like the US.

As said earlier, the production values of the film are top-notch. The camera work showcases the locations in the US in a good manner. The locations chosen, production design, everything is top-notch in this film. The BGM is also good but the dubbing especially for Michel Madsen’s character was worse and did not create much of an impact on his role.

Coming to the director Hemanth Madhukar, his idea of a thriller is pretty good and the way he starts the film with a lot of suspense is also neat. The way he brings the twist factor into the story was also neat but after a point, his narration is predictable and you can guess what is going to happen. The film is way too predictable in the last fifteen minutes or so. But Hemanth did well with the look and field and the basic aesthetics of the movie.

On the whole, Nishabdham has a decent premise and a good supporting cast. The suspense factor is also neat in the first half. But once the twists are revealed and the film nears the pre-climax, several logics are missed and things become way too predictable taking the tempo of the film down. The only thing we can suggest is not to go in thinking too much about Anushka’s solid screen presence or performance as that is missing in Nishandham. Watch it only if you have absolutely nothing else to do.