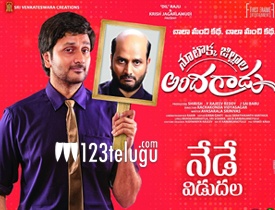 101 Jillala Andagadu is a film that is based on baldness and has Srinivasa Avasarala as the lead. The film is out now and let’s see how it is.

GSN(Srinivasa Avasarala) is a bald man who wears a wig and is very low on confidence. He falls in love with his colleague Anjali(Ruhani Sharma). The twist in the tale arises when Anjali comes to know that GSN is bald. What will GSN do now? How will he come to terms with his baldness? That forms the story.

Srinivasa Avasarala has written the story and acts in a lead role. The backdrop and how he is low on confidence because of baldness are nicely showcased by the actor. The comedy generated in the first half is also good.

Ruhani Sharma looks beautiful and does so well in the film. She got a tailor-made role after Chi La Sow and Ruhani is quite impressive. Rohini is good as the hero’s mother. The actor who played Srinivasa Avasarala’s boss also does well in his role.

The first half has decent emotions and they click at the right moments. The sensibilities work well and the manner in which the issue is told in a fun tone looks good in the first half.

The pace of the film gets a bit slow. Not that the film is bad but the director missed out on so many aspects. There was a lot of scope to add more comedy and emotions but the director touched these aspects on a lighter note.

Also, the manner in which the heroine handles the love story has no depth. She does not shy away from the hero or is heartfully with him and this aspect looks dull. One can say that the conflict point has not been handled properly and lacks depth.

The production values of the film are decent as the office premises and city backdrop is shown well. Dialogues are impressive and, so is the makeup done for Srinivasa Avasarala. The editing is decent and the music was also good.

Coming to the director Vidya Sagar he has done a passable job. He derives the hero’s character quite well and gives him a lot of importance. But in all this, he lets loose the conflict point and narrates the film on a lighter note.

On the whole, 101 Jillala Andagadu is a film with a contemporary issue that is haunting the youth these days. Srinivasa Avasarala does well as the bald man and the film has decent comedy and emotions. But the lack of a strong conflict point in the second half makes the film a bit dull. All those who like subtle comedies and don’t mind predictable storylines can give this film a shot.