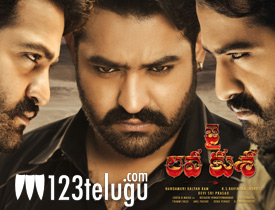 Jai Lava Kusa is one of the most awaited films in the recent times. This film is extra special because NTR is playing triples roles for the very first time. Directed by Bobby, this prestigious film produced by NTR Arts has hit the screens today. Let’s see how it is.

Jai Lava Kusa(NTR) are triplets who get separated during their childhood because of small clashes. While Jai becomes an evil blooded criminal, the other two, Kusa and Lava end up as small-time crook and bank manager respectively. The twist in the tale arises when Jai kidnaps both the brothers and asks them to help him in his political growth. What is Jai’s agenda? Why did he kidnap his brothers? How can the innocent Lava and Kusa manage the criminal Jai? To know answers to all these questions, you need to watch the film on the big screen.

Jai Lava Kusa clicks mainly because of NTR. The star hero just nails the film with his performance. He is super menacing as the evil Jai and showcases the subtleness as Lava and is knotty as Kusa. The way he has showcased variations in all his roles is surely worth a mention and proves what an actor he is. Special mention should go to the way he executes his stammering act.

The emotional thread showcased between the three brothers has been executed well during the last ten minutes. Raashi Khanna looks ravishing and plays her role well. The fights and thrills composed look top class and evoke a lot of clap worthy moments.

The climax is very interesting as the film ends on an emotional note. Ronit Roy makes a decent Tollywood debut and Sai Kumar does justice to his role. Posani is okay so were Praveen and Brahmaji. The first half has some fun moments whereas the second part gets a bit serious.

The story of the film is quite predictable and after a point, you exactly know what is going to happen next. Devi Sri Prasad’s music is not up to the mark as some more good songs could have easily helped matters much.

The film has a roller coaster feel as good and bad moments keep coming in one after the other. Heroines Raashi Khanna and Nivetha Thomas do not have much to do and Nivetha’s role, in particular, has no motto and looks outright silly. The emotional bonding between the brothers is showcased in only a few areas.

There are certain logics which go missing in the film. The bank issue where the money goes missing and also the way Pradeep Rawat’s character is ended look out of place and have no proper ending.

The film looks quite rich as the visuals are pleasing. Camerawork by Chota K Naidu is good and especially those scenes which showcase NTR in a triple role are quite realistic. DSP’s music is just about okay but his background score is amazing. Dialogues have been written supremely well and those written for the NTR’s stammering part are even good.

Coming to the director Bobby, he has done an okay job with the film. He has written Jai’s role well but you never get the feel of brotherly bonding except for the climax. The film is good scene wise but when you club it as a whole, there are many loopholes. Credit should go to him for showcasing NTR in a splendid manner.

On the whole, Jai Lava Kusa is NTR’s one-man show. The film is surely a treat for fans as they will love Jai’s negative role in particular. Even though the film has an old school storyline and slow narration in places, the way it has been showcased ends up as a good watch for fans and an average watch for the regular audience. All we suggest you is to lower your expectations before you watch the film.