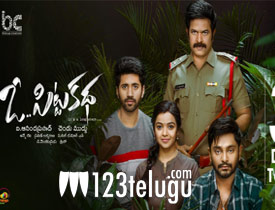 Senior actor, Brahmaji’s son, Sanjay is making his debut with the film O Pitta Katha that has hit the screens today. Let’s see how it is.

Venkata Lakshmi(Nithya Shetty) leads a happy life with her father in a small town. Prabhu(Sanjay Rao), who works with Venkata Lakshmi’s dad falls in love with her right from his childhood days. Even Venkata Lakshmi loves Prabhu and when things seem to be going fine, a new character named Krish(Viswanth) enters the scene and he too falls for Venkata Lakshmi. After knowing that both Prabhu and Lakshmi are in love with each other, he plans to separate them. During the same time, Venkata Lakshmi gets kidnapped leaving everyone surprised. Who kidnapped Venkata Lakshmi? Is Krish involved in this setup or is there some other angle to the story. To know this, you need to watch the film on a big screen.

The last half an hour of the film is quite gripping. The thrills and twists showcased during this time have been executed well by the director. The interval bang of the film has also been handled nicely. The flashbacks of both the heroes and the connection to the story are set up well.

The actor who played the role of hero Sanjay’s friend also evokes a few good laughs. Hero Viswanths gets a key role and he does well in the film. He had a lot of scope to perform and Vishwanth showcased good variations in the film. Coming to the other debutante Sanjay Rao, he too did well for his first film. Though he has a long way to go, he was good in his given role.

Telugu girl, Nithya Shetty gave a wonderful performance. Not only does she looks good but performance wise too, she has a lot of potentials. She was amazing in all the romantic scenes of the film. The rest of the cast did well.

Until the interval point, the film does not create much interest for the audience. The so-called filler scenes in the film do not create any impact and have a dull narration. The director Chandu chose an interesting storyline but his treatment in key scenes is not up to the mark.

The romantic track between the heroine and Sanjay is not elevated much and is very dull. The scenes that show these effects are quite boring. The rest of the proceedings are quite boring and do not create much interest for the audience. Things work only in the last half an hour.

Praveen Lakkaraju’s music is very impressive as most of the songs sound well and have also been shot beautifully. Camera work is also good and the dialogues are natural. The production values of the film are also top-notch. Editing is disappointing as many scenes could have been chopped off. Coming to the director Chandu, his execution is dull during the initial stages of the film but he picks up during the last half an hour and thrills the audience.

On the whole, O Pitta Katha is a suspense thriller that has an engaging last half an hour. The twists showcased during this time and the way they are unleashed with gripping narration are plus points. But to enjoy this, one needs to watch the boring and dull proceedings which make the film a below average watch this weekend.