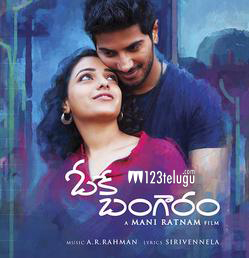 Legendary film maker Mani Ratnam is back with yet another romantic entertainer Ok Bangaram. Starring Dulquer Salmaan and Nithya Menen in lead roles, this film has hit the screens today. Let’s see how it is.

Aadi(Dulquer Salmaan) and Tara(Nithya Menon) are two young corporate employees who live in Mumbai. They lead a posh life style and are not interested in the concept of marriage. One fine day, they cross paths and get going instantly. Very soon, their friendship turns into a live in relation and the couple spend some happy times together.

Twist in the tale arises when the couple has to leave each other and go abroad for their future endeavors. What will they do now ? Will they end up sacrificing their careers ? Or will they go ahead with their broad minded thinking. That forms the rest of the story.

One of the basic assets of the film is the racy narration. Mani Ratnam once again proves what a genius he is. The way he showcases such a simple story in quite a breezy way is splendid. Nithya Menen is a power house of talent and is superb in her role. She looks gorgeous and brings in a whole lot of depth to the film. Prakash Raj is very good in a supporting role and brings a balance to the film.

Yet another asset of the film is the sizzling chemistry between Nithya and Dulquer. There is some magic between the couple which comes on screen and makes up for some beautiful moments. The entire film runs on their emotions and A R Rahman’s thumping background score only elevates the film to another level.

Coming to Dulquer, he is the heart and soul of the film. This young actor is a superstar in the making and does his role wonderfully. Dulquer’s looks and the way he showcases a carefree attitude in the film is awesome. Credit should also go to actor Nani for giving life into Dulquer’s character with his dubbing. Not even once does Nani make you feel that this is a dubbing film.

Story of the film is highly predictable and has been dealt many a times before. After a breezy first half, the second half becomes a bit slow. Climax of the film could have been elevated a bit more and is wrapped up in a hurry. Certain emotions of the older couple played by Prakash Raj and Leela Krishnan could have been conveyed more convincingly.

There is nothing much for the mass audience to look out for. All the basic commercial elements are missing in the film and only certain sections of audience will end up liking it.

A R Rahman’s music score is brilliant and is the backbone of the film. As said earlier, it is his background score which lifts the film to another level. Credit also should go to Mani Ratnam for showcasing Rahman’s songs such wonderfully. P C Sreeram’s visuals are top notch and showcase the film in a romantic light. The way he has showcased Mumbai is so beautiful.

Dialogues are simple and go with the mood of the film. Mani Ratnam is back in his elements with this film and nicely executes this love story. He deals with the current mindset of the youth and showcases their emotions well. The way he takes a simple story and sets it amidst the metropolitan city of Mumbai is wonderful. He cashes in on the chemistry of the lead pair and extracts a superb performance from them.

With Ok Banagaram, Mani Ratnam makes a decent comeback. He gives the audience what is expected of him and narrates the film in a youthful way. Stunning chemistry between the lead pair and thumping music score are basic assets of the film. If you manage to ignore the routine story, Mani Ratnam’s racy narration will make you fall in love all over again.