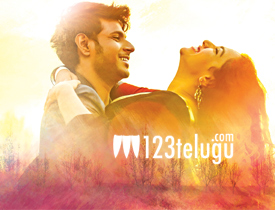 Sundeep Kishan has been aggressively promoting his latest film Okka Ammayi Tappa from the past few days. Also starring Nithya Menen, this film has finally hit the screens. Let’s see whether Sundeep Kishan’s hard work pays off or not.

Krishna Vachan(Sundeep Kishna) is young guy who is in search of his childhood sweetheart Mango(Nithya Menon). One fine day, he gets stuck in a massive traffic jam on the hitech city flyover. There, he spots Mango and starts flirting with her without knowing that she is the same girl he is looking for.

Amidst all these chaos, he receives a phone call from a dreaded gangster called Anwar(Ravi Kissan) who is behind this huge traffic jam. Anwar starts blackmailing Krishna that he will kill his sweet heart if he does not ignite the bomb which has been planted under the flyover.

What will Krishna do now ? How will he save all these people stranded on the flyover from this bomb ? That forms the rest of the story.

Story of the film is quite interesting and has been set nicely amidst the hitech city flyover. Sundeep Kishan is whole and sole attraction of this thriller. Right from the first frame, Sundeep carries his role sincerely and does his best as Krishna. His performance during the climax and certain confrontational scenes with Ravi Kissan have been executed well.

Last 20 minutes of the film are decent and has some interesting moments. The suspense involving Ravi Kissan and all the twists that are showcased during this time is quite good. Sundeep Kishan’s chemistry with Nithya is decent. Pruthivi is okay in his cameo.

Even though the story of the film is quite strong, the narration is what hampers the overall experience. The film suffers from a hugely lack lustre first half. Nothing much happens during this time and the actual story kick starts during the interval block. Logic goes for a toss and there are many scenes which lack clarity.

There was a lot of scope for the director to induce comedy, romance and many more elements. Even though he did all those, none of them work one bit. The film just wanders from here and there with out any clarity. Yet another drawback is that the film lacks major emotions as they do not connect to the audience well.

Ali’s comedy irritates the audience big time and there are certain loud scenes which could have been toned down big time. Surprisingly, Nithya Menen has nothing much to do in the film. She has a very weak role as the complete film is dominated by Sundeep Kishan.

Camerawork by Chota K Naidu is pretty good as the flyover and the surrounding ares have been created and showcased wonderfully. Even though the CG work is below average in certain areas, Chota’s clever camera work covers it up nicely. The flyover set up and the entire art work is decent. Screenplay of the film is a huge setback as many scenes lack connectivity and have not been established well.

Coming to the director Rajasimha, he has chosen a decent story but falters completely with the first half. There was so much he could have done with the film but he looses track during this time. It is only during the second half, he gathers things and ends the film well.

Okka Ammayi Tappa is a film which falls in no man’s land. The film which could have been a very good experience is bogged down by some mediocre and out dated narration. If you manage to keep your expectations in check and sit through the sloppy first half, you will end up liking the film, for its unique story and interesting last half an hour.