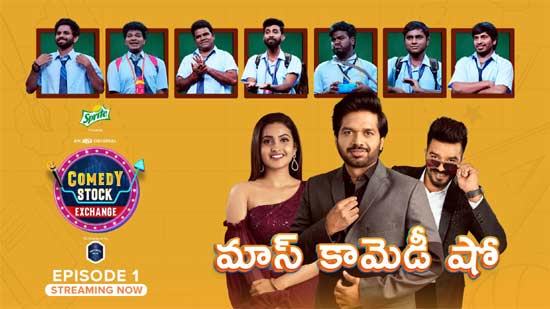 Aha has now come up with a new show titled Comedy Stock Exchange. Blockbuster director Anil Ravipudi is making his OTT debut and is also the show’s chairman. Sudigali Sudheer and Deepika Pilli are the hosts. There would be six stocks in the show, aka the comedy artists. They are Mukku Avinash, Yadamma Raju, Venu, Express Hari, Gyaneshwar-Bhaskar duo, and Saddam Hussain.

The six contestants are introduced in a nice manner and analyzed based on their different traits like experience, comedy timing, strategy, following, dancing skills, commitment, content, screen presence, and mannerisms.

The audience is the investors, and they would have the Comedy Stock Exchange app on their phones. The viewers would vote for the contestants’ performances which would eventually reflect on the comedy index. The value of each stock keeps changing on the index depending on the performances. Better the performance, the higher the stock value will be.

Anil Ravipudi recalled his schooling days when his friends used to act in front of their teachers to avoid punishment for their mischief. Anil Ravipudi was fun to watch and delighted viewers with his timing. The contestants shared their school and college incidents and performed accordingly, which is the first episode’s theme.

The first round is Atulantadi Manathoni. The contestants took relatable topics like backbenchers’ copying style during exams, FLAMES game played in school days, the strict behavior of P.E.T faculty in schools, and children’s naughtiness in annual day functions. The concepts were presented in an engaging manner which impressed the audience.

Saddam’s act received the highest voting from the audience, and he was rated the best stock in the first round on the stock index. The second round is named Padha Chuskundham. Anil Ravipudi stated that the second round would change in every episode and would be a surprising element.

In this episode, the contestants must translate old Telugu idioms into English. The one who presses the buzzer fast can give their answer first, which can improve their stock value. This round generated good laughs with the funny English translations and contestants pulling each other’s legs. Raju came on top of the index after the second round.

The third round is titled Ichhi Padestham, where all the contestants will perform a skit together, and the audience will vote based on their individual performances. All the contenders did their best to generate laughs. Anil Ravipudi opined Saddam’s performance gave him more relief. Eventually, Mukku Avinash is declared the laughing stock of the day.

On the whole, the first episode of Aha’s Comedy Stock Exchange has relatable fun with contestants showing their histrionics. The way the stock market topic, including the bulls and bears concept, is linked to this standup comedy show and the contenders’ performances is pretty good. The promising initial episode now created more expectations for further episodes.