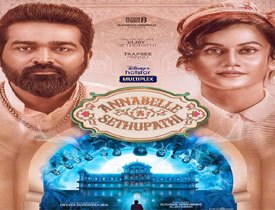 Annabelle Sethupathi, starring Vijay Sethupathi and Tapsee in the lead roles is streaming on Disney Hotstar now. The film can be streamed in Telugu and Tamil languages. Here’s our review of the film.

Rudra(Tapsee), a burglar plans to rob a deserted palace along with her family members. But after entering the premises, she realises that she has special connection with the palace and the one who built it, Veera Sethupathi. What is the back story about the palace?

Vijay Sethupathi makes a very brief appearance in the film but he leaves a lasting impression with his fine performance. Tapsee bags a meaty role and she excels in the same.

The flashback portion forms the crux of the film and it is conceived and executed very well. It packs the right amount of emotional connect.

The track pertaining to the ghosts that are trapped in the palace and Rudra(Tapsee) messing with them is showcased in a silly manner. The comedy track is unnecessarily loud and ineffective.

Barring the flashback, the rest of the plot is wafer thin. The narrative turns monotonous as we are served the same horror comedy scenes again and again.

The director Deepak Sunderrajan pens a horror comedy subject and loads it with slapstick comedy. The background score is decent, but there is nothing much to speak about the songs. Production values are very good. The palace set is of top quality.

Take out the 20-odd minute flashback portion and Annabelle Sethupathi is a lacklustre horror comedy that struggles mostly due to shabby writing. Vijay Sethupathi and Tapsee excel in their roles but the narrative doesn’t complement their performances. The film makes for below-par watch.