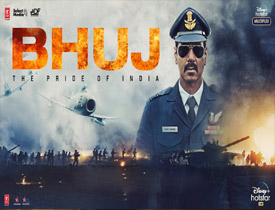 Continuing the trend of reviewing films and shows on OTT, today’s pick is Bhuj The Pride of India. Starring Ajay Devgan, this film is now streaming on Hotstar. Let’s see how it is.

The film is set in 1971 when the Pakistan army attacks the Bhuj airbase taking commander Vijay Karnik(Ajay Devgan) and his team by surprise. Several lives are lost in this attack and the airstrip is also badly damaged. Meanwhile, Pakistan also destroys Surajbari and Banaskatha bridges and five major roads that lead to Bhuj. In such a tense situation, how will Vijay Karnik handle the Pakistan army and where do Sanjay Dutt and Sonakshi Sinha feature in this setup.

Ajay Devgan is the one actor who has a good screen presence. The star hero mouths some patriotic dialogues and was decent. Sanjay Dutt had a weird role but he too did his bit and was good in the climax. Norah Fatehi is impressive as a spy.

Sharad Kelkar was decent as an army officer. The starting ten minutes of the film are pretty interesting. The action blocks are decent and a lot of money has been spent on them which can be seen on screen. The climax is handled well with a neat action block.

The biggest villain of the film is the VFX which is quite tacky. The problem is that it has been overdone and this is where several scenes look fake and defy logic.

Scenes-wise, the film looks good but the editing is so pathetic that it spoils the flow. Apart from the action part, war films have good drama but that is mostly missing in this film.

Several independent scenes are joined to make things work and this is where you do not get connected to the theme. The action is good but the emotion is missing.

When India is going through serious times during the war, songs break out and for the first time, Sonakshi Sinh looks so out of place. Even Pranitha Subhash has absolutely no role to play.

The makers have spent a lot of money on the VFX which is poor. The camera work is disappointing and for some reason, the dialogues do not create much impact. As said earlier, the editing is horrible as many scenes do not have a proper connection.

Coming to the director Abhishek, he has taken a good story and a perfect backdrop. He narrated most of the action through VFX and has put the drama aside which takes the film down.

On the whole, Bhuj The Pride of India has a solid backdrop. But the usage of tacky VFX and lack of emotions in the second half take the film down in no time. Ajay Devgan tries hard to impress and the proceedings are larger than life. But the needed patriotic drama is missing making this film a dull watch this weekend.