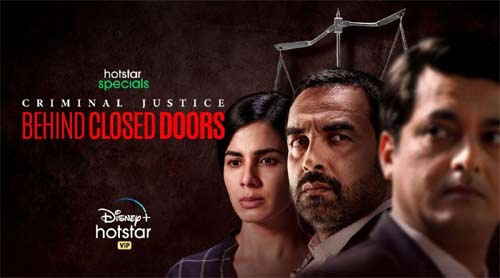 So, continuing the series of reviewing movies and shows, our today’s pick is Criminal Justice 2, the latest Hindi web series on Disney Hotstar. Let’s now see how it is.

In the second season, Madhav Mishra(Pankaj Tripathi), a small-time lawyer takes up another case of Anu Chandra(Kriti Kulhari) who murders stabs her husband Bikram Chandra(Jisshusen Gupta). Things take a U-turn for Madhav when Bikram dies in the hospital. Did Anu really kill Bikram? Is there a new angle in this murder? and how will Madhav solve it? That forms the story.

The setup and story look quite gripping. What looks like an open and shut case, the narration makes it quite interesting. Kriti Kulhari is amazing as Anu and did her emotional role superbly. She, in a de-glam role, has so much scope to perform and gives a memorable performance. Pankaj Tripathi is once again the soul of the show with his subdued acting.

The manner in which he deals with the case and how his funny histrionics in his conversations with his wife, he has showcased emotions in a beautiful manner. Deepti Naval, Jisshu Sen Gupta, and the supporting cast did a good job. Asish Vidhyarthi as a lawyer and Anupriya Goenka were also neat in their roles.

The production values of the show are top-notch. Most of the show happens in a court and jail and these setups are quite realistic. The domestic abuse angle is showcased in a very delicate manner. The way the last episode showcases shocking problems that women go through in their marital life has been addressed well.

One of the biggest drawbacks of the show is the slow pace. The story is addressed in a way too slow manner and this was not necessary at all. The screenplay could have been tighter in many courtroom scenes in the end. Also, the show could have been wrapped up in six episodes and was unnecessarily dragged to eight.

Why the main man, Jisshu Sen Gupta tortured his wife and what was his motto for being such cruel should have been showcased in a better way. Too many jail scenes are disturbing and that aspect could have been reduced to make things look better.

On the whole, Criminal Justice is a gritty courtroom drama that addresses key issues in domestic abuse. The setup, solid performances, and confrontations are basic assets. But the slow pace and length in a few episodes drag the proceedings a bit. Barring this, this series ends up as a decent watch