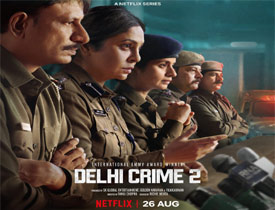 Delhi Crime on Netflix is one of the most critically acclaimed shows that has even won the International Emmy Awards. The OTT platform has come up with season 2 now. Let’s see how this second season is.

A terrifying menace takes place in Delhi as a notorious gang commits quadruple murders of senior citizens. The national capital goes into a panic mood due to these ominous criminals. DCP Vartika Chaturvedi is given the responsibility to take down the gang and stop these heinous crimes. Who are the members of this gang? Did Vartika and her team catch them? This forms part of the rest of the show.

Season 2 is thoroughly layered with a very good screenplay. The entire police investigation procedure is gritty and hooks the viewers most of the time. The issues present in the personal as well as the professional lives of Police officials are well showcased. There are a few subplots in this regard that add sufficient emotional depth to the series.

The series talks about the injustice done to underprivileged tribes. These scenes are taut, riveting, and also thought-provoking at the same time. Just when we think that the series became predictable it throws us some unexpected scenes that depict the high quality of writing.

The characters of the killers are well written that unfold over the end. Certain scenes definitely will shock the audience. The intensity is well maintained throughout the series which isn’t an easy task.

Shefali Shah nailed the DCP role and she is a delight to watch in this series with a very subtle performance. She is well supported by Rasika Dugal and Rajesh Tailang.

As the show is a successor to season 1 which set high standards comparisons will be on. In that case, there would be a bit of disappointment as this series falls just short of excellence.

We are just told about the gruesome nature of the killings and just a few photographs were depicted regarding the crimes. Had the modus operandi of the criminals been showcased properly it would have enhanced the overall impact. Also, we get the feeling that things are very rushed. This season 2 is admittedly a very shorter one than season 1.

Technically, the show is top-notch. The background score by Ceiri Torjussen is terrific and ideally in sync with the theme of the series. The cinematography by David Bolen is superb and adds to the viewing experience.

Editing by Antara Lahiri is crisp. The writers Mayank Tiwari and Shubra Swarup have done an awesome job in coming up with a largely engaging and gripping series. Tanuj Chopra’s direction is equally good and he managed to extract first-rate performances from the actors. He delivered big with one of the most anticipated sequels which is an uphill task.

On the whole Delhi Crime Season- 2 is a well-made crime thriller with a high amount of gripping moments. It has a solid screenplay, splendid performances from the star cast, good emotional depth, and a very interesting police investigation procedure that is all needed for a good crime thriller. On the flip side, it is not as great as the first season and things are a bit rushed. Nevertheless, the show is highly worth watching.