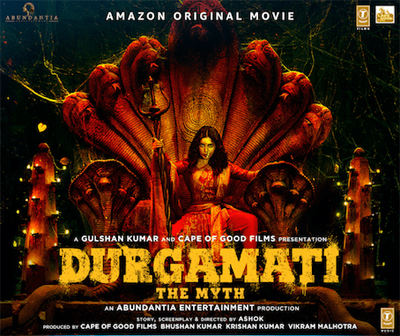 Continuing the trend of reviewing shows and films on OTT, today, a Hindi film called Durgmati has hit the small screens. The film is available on Amazon Prime and let’s see how it is.

Eshwar Prasad(Arshad Warsi) is an honest minister who appoints Chanchal Chauhan IAS(Bhumi Pednekar) as his personal secretary. As time passes by, he opposes the high command for a cause. In order to pull him down, the government targets Chanchal. They take her to an undisclosed location called the Durgamati Haveli. Upon their investigation, they get the shock of their lives when they see Chanchal behaving like Durgamati herself. Who is this Durgamati? What does she have to do with Chanchal Chauhan? and what is the twist behind the political setup? To know the answers, you need to watch the film on the big screen.

The production values of the film are good. Among the major cast, it is only Jisshu Sen Gupta who is sincere as the cop and does well in the film. Arshad Warsi was okay in his role. Just a few horror scenes are okay in the film. The last twenty minutes where the actual suspense is revealed looks good and Bhumi does well here.

Speaking of Bhumi, though she is not at her best, the noted actress does well in some key scenes and tries hard to pull off the two-dimensional character. The film has some neat visuals and the sets created for Durgamti Haveli, VFX used, and makeup was impressive.

One of the biggest drawbacks of the film is its casting. Director Ashok has failed badly in casting the right people for key roles. Right from the police constable played by Dhanraj to Arshad Warsi, things are not right with the actors chosen. The supporting cast, and other key characters just ham in their roles, and the film starts looking silly from the word go.

The story is not established well and the key character of Eshwar Prasad has no weight which was not the case in the original. Upon this, Arshad Warsi sleepwalks in his role completely and looks totally disinterested.

But the major drawback was that Ashok could not get the magic out of Bhumi who is a super talented actress. She is no match to Anushka and looks lost in her role though she tries hard. The suspense elements do now work and until the last half an hour, the film looks silly, forced, and over the top irritating the audience.

As said earlier, the production values of the film are good and so were the visuals. Dialogues are silly and look foolish. The music is bad but the BGM was good. The screenplay goes for a toss as the scenes look forced and the emotions are not conveyed at all.

Coming to the director Ashok, it is surprising to see that he has spoilt his own film that he made so well in Telugu. His command of the language, the setup, and emotions fail in his narration. Also, he does not make use of good actors like Bhumi, Arshad, and Jisshu who look out of place, and all this is because of this jaded narration. Only in the last few minutes, he creates some interest.

On the whole, Durgmati is a poor remake that never takes off. Lack of interest from the actors, over the top performances, dull setup, and lack of basic emotions spoil the film from the word go. Except for the last twenty minutes, this film has nothing to showcase. All those who saw the original will hate this film and those who haven’t watch it at your own risk as there is nothing much worth engaging.