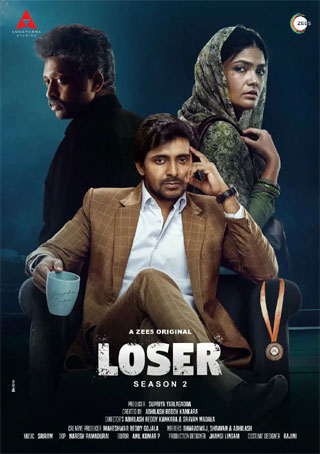 Loser, the Telugu web series on Zee 5 was appreciated a lot. Now, it has come out with its season 2 which is streaming now. Let’s see how it is.

The story is about three sportspersons Suri Yadav(Priyadarshi), Rubi(Kalpika Ganesh), and Wilson(Shashank). The first season shows Suri Yadav becoming an air rifle national champion, Rubi fighting her abusive marriage, and Wilson ending up as a cricket coach. In the second season, Suri Yadav joins a government job but quits it to earn money and respect. Rubi leaves her past behind and decides to support a young girl who is interested in badminton. On the other hand, Wilson decides to train his son to become a fast bowler. How will these three characters manage their new challenges in the basic plot?

When compared to the first season, the production values of the show are pretty good. The setup is improved and the taking is also impressive as dramatic scenes hold the screen. Sashankh as Wilson plays his role convincingly. He as the failed cricketer brings in-depth to the show. The manner in which he conveys his emotions deep within is so good to see. The actor who played his son is wonderful. His body language and chemistry with his dad are showcased well by the young actor.

Kalpika Ganesh does not say much but emotes a lot with her eyes. This time, her body language and her ease in performance are even better as she has read the character in and out. Actor Suriya as Priyadarshi’s boss, Dhanya Balakrishna as the Ad filmmaker and Ravi Varma as Priyadarshi’s coach do well.

But the second season belongs to Priyadarshi as he gets so much scope to perform. His character faces insult goes through a transformation and Darshi shows all these aspects wonderfully on-screen. Especially his scenes with his boss in the government office are superb.

The manner in which the story moves ahead in season 2 has been established well. Among the three stories, the conflict between father and son in Wilson’s story and Priydarshi deciding to earn respect draw our attention.

When compared to the first part, the emotions in the second season are not that great. As the characters have come out of major issues in life, the problems shown are decent but not that emotional.

The story moves ahead in the second season and new issues are also established well. Even though you feel that proper closure is given to the proceedings, the needed drama could have been better in the end. It is a bit predictable.

As said earlier, the production values by Annapurna Studios are top-notch. The BGM, camerawork, and production design have only improved in the second season. The camerawork is quite impressive as it shows the location in Hyderabad in a very realistic manner. Dialogues are very good and the editing part is also good.

The show has been written by Abhilash Reddy and Shravan Madala. In season 2, the character graphs are continued well and the issues shown are also relatable. Also, the manner in which each character in the story has a purpose and is linked is very good in the series.

On the whole, Loser 2 looks rich with good production values and able performances. The character graphs are continued well in the second season and things are ended on an impressive note. When compared to the first season, there are not many standout moments. But as the series is narrated without any hiccups and has a good setup, it makes up for a decent watch.