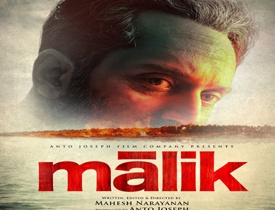 Malayali superstar Fahadh Faasil will soon be enthralling Telugu audiences with Pushpa. He plays the lead antagonist in the Allu Arjun starrer. His latest outing, Malik is streaming on Amazon Prime. Here’s our review of the film.

Story: Sulaiman(Fahadh), an ageing crime world kingpin in Ramadapally, Kerala is arrested by the police for committing numerous crimes and atrocities in his prime years. The police department then conspire to kill Sulaiman in the jail in order to put an end to his crime syndicate. Will they be able to do so? If yes, then how? The answers to these questions form the remaining plot.

Fahadh Faisal is one of the finest actors down South and boy does he deliver a commendable performance in Malik. His body language, screen presence, and the way he emotes are of elite quality. Nimisha Sajayan, Vinay Forrt, Joju George, and Sanal Aman play other important roles and they deliver exquisite performances. The casting is bang on point.

Malik unfolds at its own pace and it needs to be said that the film does not cater to all sections of the audience. While a section of the viewers might find it extremely compelling, others might feel it is a borefest. The plot is novel and so is the screenplay.

There is a 14-15 minute long single shot in the film and it is pure cinematic brilliance. The technical finesse paired with Fahadh’s scintillating screen presence make this particular sequence a highlight of the film.

As mentioned above, Malik draws polarised opinions. The proceedings are narrated at a rather slow pace and not many of native Telugu audiences are accustomed to it.

The film is over 160 minutes long and being a political thriller, keeping the viewers engaged for such a long period of time is extremely tough. There are few stretched out sequences in the middle portion that bring the tempo down. The pre-climax portion is a tad patchy. The build up to the big climax should have been better.

Also, the set-up and localities are indigenous to a small locality in Telangana. So, native audiences might not fully connect with the plot.

The director Mahesh Narayanan has a clear vision. He narrates his story in the most authentic way possible without any deviations. Sanu Vardhese’s cinematography is pure class. His work behind the lens is brilliant. Sushin Shyam’s background score is riveting.

Malik is a novel political thriller that stays true to its theme. Fahadh shoulders the film with his brilliant performance. Those who love authentic political thrillers and don’t mind the slow-paced narration will love the film and the rest will find it boring.